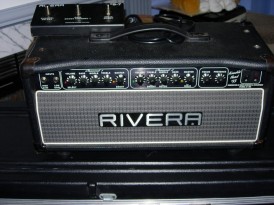 Great tone is expensive. We all know this to be true, right? If you spend any time at all reading guitar magazines and web sites, you will encounter many players debating, touting, and otherwise obsessing over some of the most costly and often difficult-to-obtain guitars and amps, all in pursuit of a sound that nothing they have previously encountered ever gave them. This approach to tone-seeking is all well and good for the upper crust and hoi polloi elements out there, but not all of us have the bankroll to burn through multiple top-end pieces looking for our sound. Thankfully, there are many great-sounding bargains to be had in guitar-land, if you are a savvy player and know where to look and what to look for. Now, I am not going to expose my own personal Happy Hunting Grounds here on Gear-Vault, but I will tell you about one of the most undervalued amplifiers out there right now that you can probably track down on your own turf, namely the late 1990’s Rivera Knucklehead 55.

Rivera amps have been popular since Paul Rivera left Fender and started his own company and have also always been flexible and useful tone machines. The Knucklehead 55, along with its 100 watt big brother — The Knucklehead, is the first version of Rivera’s Knucklehead line, which is still being made. My personal amp was probably made around 1998 and packs 55 watts of EL34 power that fuels two foot-switchable channels for clean and dirty, each with their own independent boost.

The Knucklehead excels at tones ranging from spanky Fender-ish cleans to gainy Marshall JCM-800 sounds that are perfect for straight-up rock and blues. It doesn’t have the third high-gain channel that modern Rivera Knuckleheads have for ultra-saturated sounds, nor does it have reverb. If you can live without those features, however, what the Knucklehead 55 does have is a whole lot of pure, USA-made tube tone at a very friendly price.

I paid $650 for mine a couple years back and that still seems like a deal. If you want the 100-watter, you can probably find one for around $800, which is still a killer price. I have used my Knucklehead to play everything from rock to country and can tell you that, even though I am really more of a 6L6 guy, this amp is some of the best money I have ever spent. Plus, it packs the legendary Rivera reliability factor, meaning this is an amp that can take a beating and come right back for more.

All those looking to feed their tube tone jones would do well to check out these older Riveras. Clued-in players know to investigate former top-of-the-line products ten or more years after they came out when looking for great stuff cheap and the Knucklehead 55 certainly is worthy of being considered under those conditions. These seem to be popping up on the used market more and more, so finding one shouldn’t be too hard. Keep watching this space for cool stuff out of my Secret Stash of guitar goodies, as there are many more treasures to come.

Many guitar players tend to make a certain face when they hear the word “Squier”. It’s the same face you make when someone says “telemarketing job” or “infomercials”. Forever destined to be the Yugo of […]