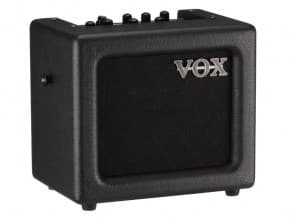 After a week of testing, let me introduce, the one and only VOX Mini3 portable guitar modeling amplifier.  I received VOX Mini3 for review purposes, and let me tell you, this little amp didn’t disappoint.

What is a modeling amplifier?

I won’t go into amplifier classes too deeply and the difference between “real” and “not real” amps. This is a subject for some other article, this debate is 20 years old or so, when modeling amps started to hit the market. It will be better to picture a machine that with the press of a button, or twist of a knob, could change between the sound of a Fender or Gibson, Marshall or Vox amps.

Also with a Mini3 you can choose sounds from 50’s to 90’s, from classic Chicago blues tone, via UK ’70 & 80’s and finishing with a powerful and heavy sound for metal acts wielding guitars. Modeling amps are for guitar players who want to get a tonal palette that they wouldn’t have access to with just one amp. On VOX Mini3 you have 11 amp models!

Great Amp For The Money

Well, I know I got this amp as a review item, and I don’t want to check how much it cost, but just for purpose of the review I will. For just about $100 you get much more than competitors with a higher price. First, this is a British product with a long heritage. Secondly, they have a great respect from musician community and music industry.

There is nobody on this planet who didn’t hear about the Beatles! In 1950’s when the Beatles just started, they chose VOX amps and that would come to define the British Valvetronix sound for years to come!

For less than one Benjamin you get 11 amplifiers in one, with 8 different effects, bunch of inputs and outputs, so you can connect microphone,bass guitar, MP3 players, CD players, and adjust it separately to become a genuine one man band and a piece of that VOX history!

The compact Mini3 features 3 Watts thru 5″ speaker a stellar tones inherited from the VOX Valvetronix series. Also with a great input logic, which include an AUX IN Jack, for connecting an external audio devices like MP3 player, and a MIC IN jack. You can play along with recorded music accompany your vocals on guitar.  Another great feature is that you can also adjust the send level from the MIC IN jack to the DELAY/REVERB effects by using the dedicated DLY/REV SEND knob. 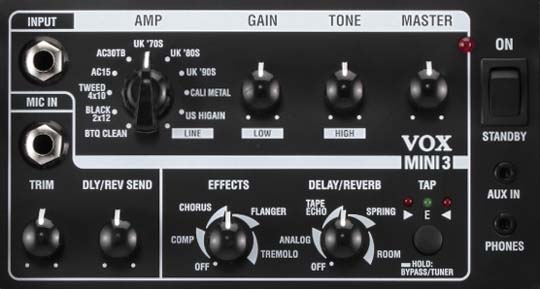 The King Royale was tested with a series of P90 and humbucker equipped guitars (and even a Jazzmaster thrown in for good measure). The result? Beautifully rich, harmonic tone that can only be produced by EL84 tubes in a Class A amplifier. Armed with the King Royale and a Gibson Les Paul, it takes less than five minutes to dial up Brian May’s ‘Killer Queen’ sound…no kidding. […]

Since 1959, thousands of guitarists have chosen the VOX AC30 for an authentic, honest, style-defining sound. For the purist, Vox offer the all-tube Custom Series, equipped with original Celestion Blue AINiCo speakers (AC30C2X) or Celestion Greenbacks (AC30C2). Looking for something lighter to carry and lighter on checkbook? Check out the AC30VR, equipped with Vox’s highly-acclaimed Valve Reactor circuit. As expected the AC30 delivers an iconic tone as unique as you are. […]