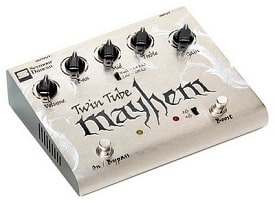 WHO COULD HAVE imagined that a decades-old company solely devoted to pickup winding would suddenly set the guitar industry on tilt with masterfully crafted pedals like the Twin Tube Classic, Lava box, Power Grid, Shape Shifter, and Tweak Fuzz. Never before has a specialized company like Seymour Duncan so successfully diversified its product line and received such high marks for its freshman effort.

Another great addition to the company’s stomp box line is the anxiously awaited Twin Tube Mayhem pedal. This is the Twin Tube Classic’s criminally insane brother, born of Duncan’s malicious intent and capable of terrifying acts of sonic aggression. Like the Classic, the Mayhem is more of a footswitchable tube preamp than a mere stomp box by virtue of its standalone ability to generate tube- derived gain and control a full-waveform signal, as opposed to only shaping or boosting portions of the sound to create the desired effect. Simply put, Duncan’s Mayhem conjures diabolic high gain as you’ve never heard from a pedal.

WHEREAS DUNCAN’S TWIN TUBE Classic creates Class A—style smooth and complex tones with a pair of triode micro tubes, the Mayhem uses a pentode tube and a triode tube to achieve more of a punchy Class AB—style response. There is no concern for the durability and shock resistance of these NOS Phillips-Sylvania 62051 micro bottles (each about an inch long)—they were originally specified by the military for use in combat conditions. Duncan wanted the most musical and dynamic distortion possible from this pedal, so no transistors or clipping diodes were employed to overdrive the signal. All of the pedal’s weapon-like distortion is generated inside these little tubes.

The gain, volume, bass, mid and treble controls are set up in a standard master volume configuration, much like any typical preamp. Each of the EQ knobs has a center detent, so they grab a little when dialed to the noon position. As midrange focus is key to shaping metal tones, the mid control’s range is set with a little slider switch. Low range sets it to a scooped 600Hz, while the high range dials into the piercing harmonic range of 1.4kHz.

Two switches are under foot: one to toggle on or bypass the unit and another to activate the Mayhem’s boost. This boost is a lot like the solo function found on so many modern amplifiers, where the volume is increased but the tone remains unchanged. An adjacent slider selects boost levels of 4 or 8db. This boost is the icing on the cake, but I wish that it could be independently activated from the distortion circuit. Power is supplied by the included Duncan 16-volt adaptor.

INSTEAD OF TESTING the Mayhem against other pedals, I went right for the jugular and pitted this pedal’s tones against heinous high-gain amplifiers like Kerry King’s Marshall Beast, a Krank Krankenstein, a Madison and my own FJA-modified Mesa Road King II. In addition, in most cases, I ran the Mayhem into each amp’s clean channel. Given the complexity and variation of the amp tones, I was more than a little surprised to hear the Mayhem convincingly and consistently copy each of their most ripping signature high-gain sounds. No, of course, they aren’t spot-on matches—that’s not the point. But they were way too close for a pedal that sells for under $300. I’ve heard a handful of other boutique level high-gain tube pedals but none that come close to the Mayhem’s flexibility and modern voices.

Even with all of this tube-derived saturation screaming through the Mayhem’s circuit, it still preserves your guitar’s tone and never compromises articulation. Single-coils, humbuckers, passives, and actives all sound appropriately different through the Mayhem, and there’s no compression added to achieve the extreme gain levels. Activating the transparent boost is like feeding crack to an angry mob. It really pushes this pedal’s output level into the ridiculous realm and somehow does it without altering the tone or touch sensitivity.

IF YOU’VE BEEN LOOKING for a pedal that can produce absolute and total sonic destruction, I dare you to try the Seymour Duncan Twin Tube Mayhem. Activating the Mayhem effectively hardwires your amp to the bowels of hell and in so doing grants you access the widest range of boutique high-gain tube tones ever packed into a pedal.