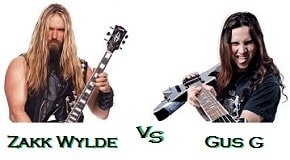 Oh God, not another one of those articles. You know, when I was given this subject to write about, I wasn’t all that thrilled. But the more I read fans’ answers, and the more I thought about how these are usually done, I warmed to the idea rather well.

Now we all know that trying to pin one guitar player over another is an impossible art – but it certainly is not a lost one. Let’s just see if we can size up Zakk Wylde and Gus G.

IN THIS CORNER: ZAKK WYLDE:

IN THE OTHER CORNER: GUS G:

This seems to be one of those discussions where the response is sharply divided, with the Zakk fanboys saying things like:

Zakk Wylde. Don’t compare a legend to a new comer

Sounds to me like the Greek kid is imitating Zakk

But the Gus camp hasn’t laid down either. They have gone so far as to say things like:

“Zakk Wylde, while still a decent player, is one of the most overrated guitarists in the history of rock music. He’s so repetitive; he’s always doing the same pentatonic runs and pinch harmonics. I personally think Gus G., while much younger, is plenty better. An incredibly talented guitarist, he’s put out some great stuff with Firewind.”

“Why is it SHOCKING that he [Gus] can duplicate a fucking pinch harmonic? Zakk doesn’t have a fucking trademark on the move.”

“Can you blame him really that Zakk Wylde had to lose a job for it? In my opinion, Zakk Wylde’s playing has been very stale for many many years anyhow, so it’s not like the fans have lost much there. If anything, they’ve gained.”

In my opinion, here’s how it shakes out. They are both very talented players. Zakk has more experience, Gus has a fresher point of view on things. Gus also has a band that he came from when joining Ozzy, unlike Zakk. [This just might be counterproductive for Ozzy, considering he booted Zakk for Ozzys music sounding too much like Black Label Society].

Many also seem to comment on Zakks trademark, the pinch harmonic. Yes, he does use it more than necessary from time to time. I would also have to say that this is one area where Gus excels. Gus doesn’t fall into those types of traps.

One other area I would like to point out, is that Gus can definitely handle the high speed, alternately picked solos. Zakk has never really been all that great at those.

I think they both have some very admirable talents, that are best displayed through the songs they write. Unfortunately, we don’t have any written material from Gus [with Ozzy], everything on Scream was written by Zakk. On that point, however, Zakk has the hits under his belt. Having penned such songs as “Mama, I’m Coming Home”, “Crazy Babies”, and “No More Tears”, well, you just can’t argue with that.

My answer here is both, with my scales tipped towards Gus. I am impressed with his melodic prowess, which is matched well by his speed and emotion. But, we want to know: What do you think, and why?

Zakk Wylde–guitarist of Ozzy Osbourn and Black Label Society–has his own line of Bullseye guitars with Gibson USA. Similar to the other Zakk Wylde Gibson Les Paul and the Epiphone Les Paul, the Gibson Flying […]

Digging through some old-old achieves, I found some interesting tid-bits on the 1990’s Zakk Wylde. He talks about his first bulls-eye Gibson, Lee Jackson amplifier and where it took his music back in the 90’s. […]