No matter what anyone says, every musician pulls influence and is inspired by at least another musician(s) in his or her lifetime. For me, my list of artists spans a few different genres, and I really don’t think some of my playing would be what it is today if not for them.

I first heard him on the radio around 2004, and enjoyed one of his tunes. I ended up buying his first live DVD called Any Given Thursday, and after that, it was history. I was completely blown away, and had NO IDEA how incredible this guy was with an electric guitar in his hands. His guitar tone was one thing, and his playing another.

I don’t really care what anyone says, this guy can shred with the best of them. When I say the best of them, I mean it. I mean he’s played with Eric Clapton, Buddy Guy, SRV’s band Double Trouble, BB King… need I say more? Mayer has some definitive playing chops, and writes some pretty decent songs.

Even though a lot of my playing isn’t really the punk-pop style, Tom Delonge and Blink 182 are one of the main reasons I even play guitar. The first song I learned, or part of a song, was a Blink lick. I’m not sure if it was the songs about constant partying, or the fast paced onslaught of punk-pop, but it made me want to play in a band.

For the longest time Tom’s weapon of choice was a surf green Fender Stratocaster with just one Seymour Duncan pickup and a single volume knob. Since the good ole’ days, Tom has upgraded to a signature Gibson ES-335 hollowbody. 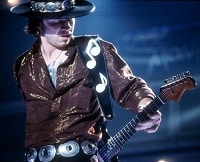 After listening to John Mayer play an SRV cover, I ended up listening to Stevie. It’s my firm belief that Stevie Ray Vaughan may have been and still could be (if he was alive) one of the best guitarists ever to live.

His speed, along with his impeccable ability to create catchy lead melodies on the spot, is something that can’t really be topped. And talk about tone…TONE FOR DAYS is what this guy’s got. A simple strat through a fender tube amp, and you’ve got a match made in heaven. Add a TS808 Ibanez Tube Screamer, and that’s really all you need to kick out some SRV licks.

If you really want to go that extra step, throw on a set of .12 gauge strings…but one thing you won’t ever be able to get are his hands. His hands are really where the true tone lies, like any guitar player.

Not only an electric blues shredder, but SRV wrote some incredible songs. My favorite, Riviera Paradise, is such an incredible instrumental song. His guitar tone cannot be matched, and his melodies are stellar. If you haven’t listened to him yet, you need to. Unfortunately, Stevie is no longer with us, and it’s a shame. He was definitely one of the greats. 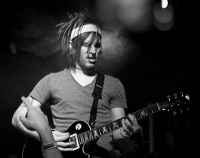 You probably have never even heard of this guy, but he’s the lead guitar player from Equal Vision Records’ hardcore/metal band Chiodos. Back in 2005, Chiodos was all the rage where I was from, and rightfully so because they hailed from Flint, MI, not far from where I live in MI.

I saw them for the first time in a Knights of Columbus hall, and once the set started, I really couldn’t take my eyes off of this guys’ gear. He was running a hot pink BC Rich Platinum Virgin Warlock (MSRP $150-300) into an ENGL Savage 120 (MSRP $3,000+, pretty opposite ends of the price spectrum.) The riffs were so chunky, and his pinch harmonics were unreal. To this day, the ENGL Savage 120 IS the heaviest guitar tone I’ve ever heard.

I hate to admit it (because this band is absolutely terrible now) but I was heavily influenced when it comes to metal playing by Hale. He never did anything extremely technical. He had a few cool lead riffs, but for me, it was the thick, mid-range dominant sound of his ENGL Savage that forever shaped how I thought a metal guitar should sound.

Don’t kid yourself if you think you weren’t influenced by someone. Everyone is. Music will always be that way, until the end of time. We all inspire each other to create, and that’s actually one of the gifts that music bestows to each and every one of us who gets the chance to play with other… no matter the size of the stage. And now my question to you… who made you pick up a guitar?

“I believe every guitar player inherently has something unique about their playing. They just have to identify what makes them different and develop it.”

Danelectro has announced the reissue of the classic Danelectro ’56 Single Cutaway Guitar. The Dano ’56 is available in a number of different options. Lovers of the Dano singlecoil sound can pick up a ‘coke […]