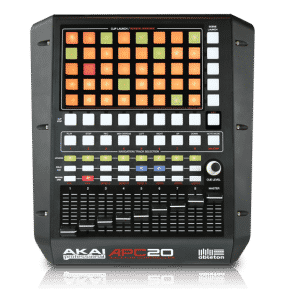 I’ve been using Live since V1.0, and discovered early on that not using a physical control surface was like driving a car with the parking break on–it moves, but it’s not much fun to drive. So, I was a happy camper when Akai announced the APC40, which had been designed in conjunction with Ableton specifically for live. It’s a great controller, my only complaint being that I wanted 16 faders instead of eight. Although you can use up to six APC40s together, I wasn’t quite ready to double my Live controller budget. And for some, the APC40’s $400 street price may be financially out of reach.

Enter the APC20
The APC20 looks like someone took an APC40 and cut it in half, then cut the price in half too. Yet as a controller, the APC20 does much of what its bigger brother can do. Furthermore, it can expand the APC40–yes, I now have my 16 faders, and you can use up to six APC20s together (or a combination of APC40s and APC20s).

Installation is painless: The APC20 connects via class-compliant USB to Mac or Windows computers, no drivers are necessary, all buttons and controls are pre-mapped, and all you need to do in Live is go into preferences and specify the APC20 as a control surface. The package includes Ableton Live APC edition (which is more capable than the typical Live “lite” version) so you can make music right away. The APC20 works with all versions of Live 8 as well as the most recent update of Live 7.

The APC20’s heart is a 5 x 8 matrix of buttons for launching clips along with another vertical row of five buttons for Scene selection. The clip buttons glow different colors to indicate clip status–empty, loaded but not playing, playing, or recording. As you likely will have a bigger matrix of clips than 5 x 8, you can move the focus up, down, or sideways to select a different part of your project. As I rarely use more than 16 channels, I set the APC40 for channels 1-8 and the APC20 for channels 9-16, then simply scroll down the project as the music progress.

The remaining buttons are laid out like Live’s interface. Below the 5 x 8 button matrix, the next row does clip stop, and there’s another row for track selection/navigation (a Shift key chooses between the two modes). Three more rows of smaller buttons handle track activation, solo/cue, and record arm.

Fun with faders
There are nine 45mm faders, one for each channel and the master. These faders default to volume, but can also control pan, three sends, and three banks of user (device) controls by pressing the Shift control then selecting the function (the APC40 has eight dedicated knob controllers for these functions). In practice, whether the volume faders having different functions matters or not depends on whether you change levels while changing pan, sends, etc. For example, if you want to pan while fading up a channel, you can’t do that with the APC20 but can with the APC40. However, in many situations the levels will remain static as you apply changes to other parameters. If that’s the way you roll, then the APC20’s controls are all you really need.

Other features the APC20 lacks compared to the APC40 are the cross fader, two footswitch inputs, and tempo nudge controls. Of course, you can always change these functions on-screen, using the mouse or keyboard. I found the solo buttons made it difficult to select another solo button once one was already selected. But you can Shift-press to select multiple solo buttons. I was also very pleased to see that turning off one solo button turned them all off–important for the kind of performance gestures I do when I want to leave a break beat and have everything else come crashing back in.

Extras
A Session Overview mode shows the general clip population in your project schematically in the clip buttons; think of the clip buttons as zooming out to give a project overview. The APC20 has a feature the APC40 doesn’t have: Note mode, in which you can trigger drum sounds (e.g., in a drum rack) from the clip buttons. These aren’t velocity-sensitive, but it would be rude to expect more at this price and they’re great for doing quick MIDI drum (or other instrument) loops.

The construction is also appreciated. I’ve been using the APC40 for several months and it’s held up well, despite occasional abuse. As the APC20 comes from the same lineage, I’d expect it to be equally reliable over time. (By the way, in case you wondered if you could remove the side panels from the APC20 so it could sit closer to another APC20 or APC40, you can’t without impacting the unit’s structural integrity . . . Sorry.) Note that while you can use the APC20 as a general-purpose MIDI controller, it’s optimized for Ableton Live and that’s by far its best application.

Conclusion
The APC20 is laid out logically and truly deserves the much-overused world intuitive. To me, this is crucial for anything intended for live performance, where there’s no time to wonder how a function is called up. I wish the Shift functions were labeled in a brighter shade or red but after a while, choosing the desired function becomes second-nature anyway.

To be fair, I have a bias toward hands-on control, particularly for Ableton Live. But play with the APC20 for a while, and I think you’ll agree that bias is justified: Live becomes more of a musical instrument than simply a piece of software. What’s more, a controller encourages a more improvisational style of playing that is not only more fun but lets you react quickly to the crowd’s mood. The icing on the cake is being able to expand the number of controllers as your budget allows. Overall, I can’t imagine any Ableton Live user not finding the APC20 a fitting addition to a great program.
Check for price.

Various types of recording and mixing software have been on the market to consumers for a long time, but few have stood up to the test of time and stayed on the market very long. […]

There is no doubt that personal computers have changed the way we record music. Gone are the days of big and bulky tape machines, expensive reels of two-inch tape, and all the maintenance that goes […]