One of the most influential heavy metal songs. Written in 1980, right when Ozzy Osbourne started his solo career, this song from Blizzard of Ozz remains a classic. It was co-written by the late Randy Rhoads. The main riff showcases economic and creative use of the minor scale–and that was pretty rare in the metal world at the time. Guitar tab: Crazy Train by Ozzy Osbourne 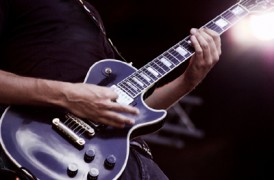 This song is probably in the repertoire of every guitarist, and very simple to play, too (except for the solo). The beginning riff was originally a string skipping exercise by Slash, and he played it in a jam session as a joke… long story short, this is a very melodic riff, a sweet song, and definitely one of the most popular songs in the rock world. Guitar tab: Sweet Child O Mine by Guns n’ Roses

A real fan favorite. From 1983’s iconic release Kill ‘Em All!, the main riff of Seek & Destroy has given a lot to heavy metal, especially the trash metal genre. The intro riff is fairly simple, and you will be able to play it in no time as the rhythm too is simple as cats. Guitar tab: Seek & Destroy by Metallica

This song comes from the Ted Nugent’s 1977 album of the same title. The main riff consists of power chords, is easy to learn, and showcases what a master of melody can do with merely ‘neutral’ chords. The melodic structure of this song is in stark contrast with Crazy Train, as Crazy Train showcases extensive use of more complicated harmonies, such as switching from minor to the respective major, whereas Cat Scratch Fever is a prime example of simple melody. Guitar tab: Cat Scratch Fever by Ted Nugent

A heavy metal anthem. Every metalhead has at least heard the chorus chanting: “RE! SPECT! WALK!”. The riff is fairly simple, but don’t even think about doing Dimebag’s solo if you are not an experienced player. Most parts of the main riff rest on the higher E string, and if you can figure out the timing, you can get the hang of it pretty fast; it can be frustrating for a beginner, so pick a different riff to learn–this is the hardest from the bunch. Guitar tab: Walk by Pantera

HOW TO CHOOSE THE BEST KIDS GUITAR FOR YOUR CHILD [2020]

Most of us readers at Gear Vault remember what age we started playing guitar and what kind of guitar we first started playing. But many parents are stumped on which kids guitar to get their […]

Hey Gear Vault readers! It’s been a while since I have written anything new for the site and I am very happy to be back here with you. My new project is a series of […]