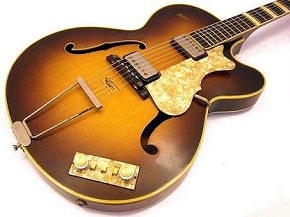 Fender and Gibson electrics from the Fifties and Sixties are among the most collectible of all guitars. But just as cool are Höfner instruments, made in Germany and costing considerably less than their American counterparts.

The most well known Höfner, introduced in 1955, is the 500/1 the electric “violin” bass that Paul McCartney made famous. An original version of this ax sometimes referred to as the “Beatle Bass,” should be relatively inexpensive. At press time I spotted several mid-Sixties models for $2,500 and less.

Höfner had an interesting line of hollowbody and archtop guitars, as well. Like certain Gibsons, many Höfners were named by model number—the higher the number, the fancier the instrument. Smaller guitars like the Höfner 456 or 457 (shown here in 1964 vintage 456 thinline), with their laminated 16-inch bodies were comparable to Gibson’s e acoustic L-4, or electric ES-175, while larger ones, such as the 17 ½-inch wide 468, were more like Gibson’s ES-5 Switchmaster. All these Höfners were made from lightweight woods, often highly flamed, and tend to sound quite loud, with lots of cutting top and middle tones.

Relatively few Höfners made it to the United States; they ended up costing considerably more than domestically made guitars and fared poorly. Thus, Höfners of North American vintage are both rarer and cheaper than old Gibsons. At press time, the only 456 I could find was in the Netherlands and was selling for about $1,137.90. Meanwhile, I saw a handful of L-45 from the same era, going for as much as $4,200.

If you’re in the market for an old Höfner, keep in mind that the manufacturer used a neck joint without a dovetail, which tended to move with time. As a result, a Höfner might need, or may have had, a neck reset. While a reset will enhance its playability, it lowers its value.

While guitar players tend to stick to a handful of tried-and-true designs, bass players are far less cookie-cutter in their mentality. From body shapes to finishes, from active electronics to creative hardware, bass players and […]