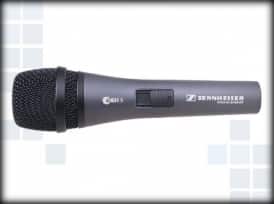 Purchasing a microphone is never an easy task. It’s hard enough to crank up a guitar amp in a music store and try to evaluate the tone of an instrument, effect or amp—all the while trying to think of something cool to play to impress those around you. But to plug in a microphone and sing—or even stand there and talk into it? Forget it. To really judge the sound of a mic, you need to take it into the trenches. Will it feed back in your rehearsal space? Will it feed back on stage? Does it sound good on vocals? How about acoustic guitar? Electric guitar? Clean or distorted? What about recording?

Sennheiser’s Evolution Series of dynamic microphones is a good, low-cost line with models designed to handle just about any of these applications. The 10 different units (six vocal mikes and four instrument mikes) are sold separately, ranging price from $79.00 to $349.00. Dynamic microphones are great in live situations because of their ability to take physical abuse and handle high sound pressure levels (condenser mikes are generally more fragile in both of these areas), and the Evolution mikes are no exception. Encased in durable steel-blue metal housings, they can clearly take a beating on the road—and they sound good enough to come in handy in the studio, too.

Vocal Mikes
The least expensive model in the series at (roughly)
$79.00, the e825S is a general purpose, cardioid vocal and instrument mic. Though best suited for vocals, it has no problem capturing the sonic range of an acoustic guitar or miking up an amp. Unlike some inexpensive dynamic mikes which tend to be either excessively muddy or thin-sounding, the 825 has a bright, clear tone while maintaining a more-than-adequate bass response. It’s a great choice for a demo studio or rehearsal space that can also perform admirably in more serious recording and performing situations.

The next model in the line, the e835 and e835S—the same as the e835—but with an on/off switch. This model has a slightly wider frequency range than the 825. The improved bass response and high-end clarity sound great on vocals and instruments alike.

The e845 and e845S are super cardioid vocal mikes, meaning that they have tighter polar patterns and therefore reject more sound from the back and sides. This helps to avoid feedback and leakage from other sound sources. These mikes have a sparkling, bright tone that helps vocals cut through dense mixes and also works well on guitars.

The top-of-the-line vocal microphone in the series is the e855, also a super cardioid vocal mic. With its wide frequency range (40 Hz to 18 kHz) and a strong boost in the high end, the 855 is excellent for stage vocals. Great sound, minimal feedback and handling noise, it does everything but make sure you sing on key.

Instrument Mikes
The e609 is the microphone in the series most useful to guitarists. Its flat-profile design and large diaphragm make it ideal for miking a guitar cabinet, while its tight super cardioid pattern avoids leakage and feedback. The e609 also does a good job of capturing the sound of an acoustic guitar, though many people prefer to use condenser mikes to record acoustic instruments. Versatile enough to use on any number of sources, the e609 is a great tool to have around.

Plug in the e602 and talk into it, and you’ll immediately know it’s designed to handle low-frequency sources like kick drums and bass guitar cabinets. The large microphone has a wonderful clarity in the low end—punchy and boomy without any muddy rumble. Its (intentional) lack of midrange and boosts in the extreme low and high frequencies give it a distinct tone and make it a great choice for its designated applications.

The other two microphones in the series, the e604 and e608 are, respectively, a clip-on cardioid mic designed to use on drums and brass instruments, and a small gooseneck super-cardioid clip-on made to mike woodwinds, brass and drums. Both of these mikes do their jobs quite well and are so small they’re practically invisible on stage.

A few decades ago, Electro-Voice set the audio industry on its ear when they introduced the NeoDymium (N/DYM) line of durable and affordable dynamic microphones, which boast response and performance characteristics comparable to costly condenser […]