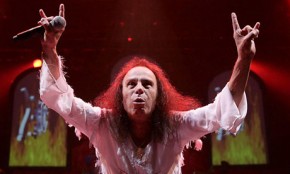 Gear-Vault is sad to report the passing of a true rock legend. Ronnie James Dio, noted heavy metal vocalist with Rainbow, Black Sabbath, and his own band, Dio, has succumbed to the stomach cancer he announced publicly late in 2009. His wife, Wendy, released this statement:

Today my heart is broken, Ronnie passed away at 7:45am 16th May. Many, many friends and family were able to say their private good-byes before he peacefully passed away. Ronnie knew how much he was loved by all. We so appreciate the love and support that you have all given us. Please give us a few days of privacy to deal with this terrible loss. Please know he loved you all and his music will live on forever. — Wendy Dio

Dio is known to metal fans as the voice of epic hits like Rainbow’s “Man On The Silver Mountain”, Black Sabbath’s “Heaven And Hell”, and his own “The Last In Line” and “Holy Diver”. He was born July, 10, 1942 but some reports of his passing have put his age as high as 67. He was forced to cancel a European tour earlier this year due to his illness but remained hopeful until the end that there would be, in his own words, “other tours, more music, more life, and much more magic.” Unfortunately, this was not to be. Dio is survived by a body of work that helped to define the heavy metal of his era and that will give his voice the immortality that is never granted to the physical body. The Gear-Vault staff bids Ronnie James Dio a sad farewell and extends its condolences to the Dio family in their time of mourning. Dio was and is an honest-to-gosh rock icon and is best remembered the way he lived: loud. Go crank something up for Ronnie this week. We here at the Vault can’t imagine a better tribute. RIP RJD. We’ll always remember his “devil’s horns”! You will be missed. July 10, 1942 – May 16, 2010 — R.I.P

The Nitrox head by Diamond Amplification is the company’s most aggressive offering to date and is built with the same level of quality as all the other products in the Diamond line. The Nitrox is […]