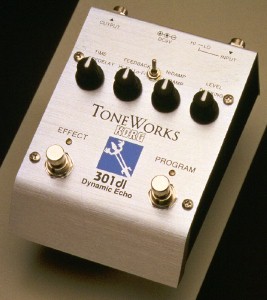 Whether it’s Eddie Cochran’s rockabilly slapback or the Edge’s autonomous counter-rhythms, listeners have always marveled at the shimmering textures and depth produced by delay units. And, just as guitarists have found new uses for delay effects over the years, manufacturers have improved on the quality and versatility of these boxes. We checked out units by Korg, DOD, and Boss to see what’s cool in the world of delay.

DOD FX 96 Echo FX Analog Delay
Featuring analog circuitry, the FX 96 is intended to reproduce the gloopy tones of early tape-echo machines and the bubbling repeats of pre-digital pedals. The pedal features the standard controls one would expect to find on an analog delay: Mix, Delay and Regen / Repeat. Also included is a Tape Quality control, an ingenious addition that lets you grunge up the sound quality of the virtual “tape” to heighten the sonic illusion.

DOD have really nailed those old tones, warts and all, with this pedal. Although Echoplex connoisseurs may not be totally convinced, the FX 96 does as mean a take as many expensive rack units dedicated to the same task. There is definitely a bit of Gilmour, Page and Brian May to be found amongst the DOD’s tumbling layers of repeats, warm slapbacks and psychedelic stoner mayhem.

Boss DD-5 Digital Delay
Using the DSP chip, Boss managed to cram a ridiculous amount of effects into the DD-5. Of the 11 available modes, 1 through 4 offer a range of clean, studio-quality delays from 1 ms to 2000 ms. Using the Panning Out socket, these silky delays can be delivered in stereo with the repeats arriving at their destination in alternating sequence.

Mode 5 is the Hold function, which is basically a mini-sampler allowing you to record up to two seconds of playing then use it as a backing. Gizz Butt of Prodigy uses this to lay down a bed of techno-babble to riff over in live performances. More digital trickery is afoot with Mode 6, which offers Hendrix-like backward swells. Although not a true reverse-taped effect, there are still some groovy suck-sounds in this mode. Finally, Mode 8 through 11 allows you to tap in a delay tempo via a footswitch.

Korg ToneWorks 301dl Dynamic Echo
This roadworthy device allows you to store two different sounds and has an extra footswitch to toggle between them. Each of the four controls on the 301dl has been assigned two functions, selected by a small toggle switch. In addition to setting the level, feedback and delay time, you can also manipulate the pre-delay, harmonic structure and relative aggression of the repeats. The unit even offers Ducking, which allows the effect to respond to the dynamics of your playing, lifting phrases out of the potential muddle of repeats.

Once you’ve invested some time in finding a sound, it can be easily stored in the Red or Green patch, ready for action. The flexibility of the 301 means you are a toe-tap away from chewing analog slap or glistening digital soundscapes. Add a Y-connector and you’re driving in stereo.

These three pedals are all very different but equally inspiring to use. The DOD delivers delay like they used to make it, without the bulk or hassle. Boss layers pro-quality sound in a simple format with funky features for good, clean fun. The Korg gives you precise control of its effects—and programmability to boot. In a world of missed schedules, these are some delays we can all enjoy.

The Fender Telecaster is seen by many as the primordial electric guitar. It is brutally simple and to the point, built for functionality, and tends to appeal to the caveman contingent of the guitar community, […]