Table of Contents show
1 VYPYR THE LINEUP
2 VYPYR FIREPOWER
3 GREAT! HOW DOES THE VYPYR PERFORM?
4 DETAILS, MORE VYPYR DETAILS PLEASE!
5 Peavey Knows What You Expect – Is The Peavey Vypyr Junk?
6 Video: Peavey Vypyr In Action!
7 Peavey VYPYR The Amp That Could and Does

Since 1965, Peavey has built a reputation for making awesome guitar amplifiers, and they continue to evolve under the guidance of the company’s founder, Hartley Peavey. Their reputation has been solidified with a series of amazing amps, such as the 6505, JSX Joe Satriani signature amp, the Valve Kings, XXX, the Classic series, the Windsor, and others. In the non-tube amp category, their patented TransTube technology is almost indistinguishable from real tube-driven amps, setting the standard for performance, tone, and affordability. And now, with their VYPYR series of amps, Peavey finds themselves at the forefront of the modeling amp race as well.

The VYPYR series is made up of six different combo amps, ranging from 15, 30, 75 to 100-watt models that make use of a digital front end with TransTube paired with a TransTube solid state power section. They also have both 60- and 120-watt models that pair digital front ends with tube-driven power sections. All of the VYPYR series draw on Peavey’s years of amp-building skill by utilizing the most advanced processing of any digital amp, even including real analog distortion generated by their amazing TransTube circuitry, which is the only solid state amp that can re-create all of the eight events that create distortion in a tube amp. The result is an awesome tone and great response from both versions of the VYPYR. The rich, digital effects are complemented by the analog distortion, which frees up processing power, creating a more organic sound experience.

Every VYPYR amp comes loaded with a 266MHz Dual Core SHARC processor that gives the series the most processing power of any modeling amp on the market. What does that mean to you? More realistic sound, a greater range of diversity, the ability to handle more effects at one time (up to five at once) and a greater range of control over the effects parameters.

The VYPYR has 24 different amp models, including both clean and distortion channels for 12 classic amplifiers, including British and American amps, and a few of Peavey’s most popular tube driven amps. One of the cool features of the VYPYR is that some of the original amps were single-channel amps (without distortion), and for the first time ever, the VYPYR gives you the option for distortion or, in some cases, a ‘boost’ channel, to give you that ‘up to 11’ option.

As for effects, the VYPYR offers 11 rack and 11 pedal effects (with the exception of the VYPYR 15, which leaves out the pedal section), all of which can be stored as presets and are fully editable. The amps give you 12 preset slots, which are arranged in 3 banks of four presets. With the addition of the Sanpera II footswitch, the number is increased from 12 to 400 storable presets (again with the exception of the VYPYR 15), which lets you use up to five effects at once and also includes a looping function, which would be a worthwhile investment for any effects-prone rocker needing a ready-for-stage solution to the boring amp problem.

GREAT! HOW DOES THE VYPYR PERFORM? 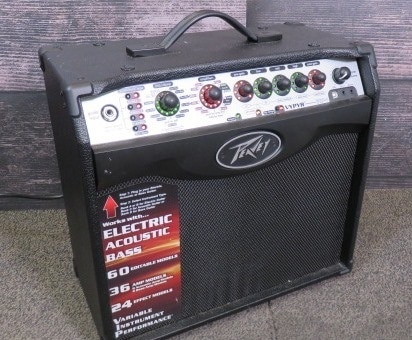 During a test run, the VYPYR 30 (the next to smallest in the series) had plenty of bite. It seemed to be suitable for most gigs. When the amp is switched on the control panel lights up, making it suitable for low-light situations. When you plug in, the LED lights switch over to the ‘operation’ mode. The multifunction knobs are labeled, making it fairly easy to get the hang of without having to read the manual (who does that, anyway?). The lights are arranged to tell you which amp models and effects are active, which channel is being used on the models, green indicating a clean channel and red is for rocking hard.

The amp delivered a realistic sound and feel, thanks to the models and their algorithms in conjunction with the Peavey TransTube technology. The 75 and 100 VYPYR series also features a Power Sponge attenuator built-in, so you can get massive tone at a lower volume (so you won’t bother your parents – much). The analog distortion also allows you to dial in pre- and post-gain, just like the other amps on the market.

The TransTube technology captures the sag effect of a tube power section wonderfully, as it responds to your picking style. For those of you who are tube purists, the VYPYR Tube 60 and the Tube 120 will help feed your ego with their real 6L6 tubes.

You want features? How about this: studio-quality USB interface (to get those tracks directly into your computer) on everything but the 15 and 30 models, MIDI in/out, a built-in chromatic tuner, MP3/CD/Aux input, pro-quality headphone out, tap tempo button, a master know that goes beyond 11 (untested…use with caution).

Peavey Knows What You Expect – Is The Peavey Vypyr Junk?

Peavey knows you want a quality amplifier that can wake the dead. And with the VYPYR Series, Peavey delivers, building on their traditional strengths with high-octane processing power and an excellent interface. The Peavey VYPYR Series rocks. Hard. www.peavey.com – Discuss the Peavey VYPYR at GEAR-MONKEY.COM

Peavey VYPYR The Amp That Could and Does

After much hoopla Peavey has finally released the VYPYR Series amplifier. Appearing so the Peavey is aiming towards Line 6 Spider, Roland Cube and Marshall MG consumers as their targeted audience. The amp comes in 15-watt, 30-watt, 75-watt and 100-watt versions. Peavey also released 60-watt and 120-watt versions that feature tube power sections. 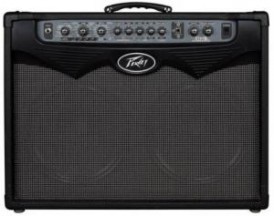 Like most Peavey amps, the VYPYR are set at an affordable price. The 75-watt combo (loaded with a 12-inch speaker) is $299. Best Buy had the VYPYR 75-watt combo listed at $209 on their web site. People were able to get Guitar Center to price match, talk about a kick-ass deal! Best Buy has since increased the price to $299 (maybe $209 was wholesale cost or a pricing error).

What makes the VYPYR unique is that it uses analog modeling, featuring Peavey’s TransTube technology. Peavey did a respectable job in the past with their TransTube amps.

The VYPYR’s 32-bit processor drives the 24 built-in amp models (clean and distorted channels from 12 popular amplifiers). There are 11 preamp classic stompbox effects that you can engage, in addition to the 11 post-amp effects. All this groundbreaking technology is operated by the 32-bit, floating-point SHARC processor.

So what’s not too like about the VYPYR? Though there is an external speaker output-jack, the built-in speaker stays active. I don’t think there are any stereo capabilities. There is a serious lack of connection options. Peavey should have looked into the Behringer V-ampire to learn a thing or two about configuration options. The Behringer VAMP has 15 rear panel connectors that allow you to connect and configure the amp for just about any possible application from the studio to live. The Behringer has midi in/out, 125 patch locations, a windows based editor to tweak the hell out of settings, pre and post stereo effects loops, S/PDIF output. All of these features would have been appreciated on the VYPYR.

Overall this seems to be a promising modeling amp, perhaps since the original Vox Valvetronix series. I wouldn’t say it is “junk”. It’s about what you’d expect.

Anyone who has some hands on experience with the PEAVEY VYPYR, please come over to GEAR-MONKEY.COM and share your opinion.

The guitar amp industry is not one with a lot of competition. While there are lots of people that make amps, you’re basically going to find that what most people buy are from names like […]

The Black Gold 35 is Kendrick’s attempt at bringing boutique amp quality and tone down to sane budget levels. With it’s all-tube circuitry, which includes a pair of 6L6’s pushing a duet of Kendrick 10″ […]