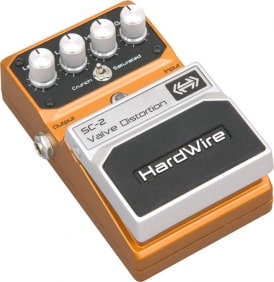 The moment you hold this pedal, you can tell that serious thought, and attention to detail, was put into its design and build. It has a heft that tells you it’s built to last. And speaking to those details, the housing has beveled edges where you would find corners with chipped off paint on its predecessors.

An uber-bright blue LED lets you know the pedal is on and is almost powerful enough to be part of your light show. Each of the rotary controls has detents to help dial in the exact sound you’re looking for. The crunch/saturated switch is heavy duty; no cheesy plastic push buttons here. The rubber backing and footswitch pad beg you to hit it with your best stomp, while the battery compartment is smartly housed right beneath the aforementioned bypass footswitch. And to top off the amazingly low street price, (under $100) is one of the finer details; “Made in USA”. Most pedals suggest that they were manufactured right next to your child’s favorite new toy. Also included with the usual candy wrapping are a “stomplock” which protects the pedal controls from accidental changes and clumsy feet, a cut-to-fit loop fastener to make easy attaching to your floorboard, and a glow-in-the-dark sticker to make easier finding of the foot pedal on a dark stage.

Putting this pedal to the test, I plugged in to a small practice amp and a larger tube combo. On the other side for both tests were a hot-rodded ’51 Squire with Duncan Pickups and a Maple Top CE-24 Paul Reed Smith with vintage voiced humbuckers. Keeping the gain at zero with the Level, Low and High at high noon only a slight shift in the mid frequencies are noticeable. Keeping the function switch set to Crunch, the gain was brought to high noon as well. Using the ’51 at this setting, the SC-2 elicits those fab tones of a black dogs and notions that you won’t be fooled again. Using the PRS it was an open invitation to a blues jam. Turning up the low gives your ears the pleasure of believing what they hear is coming from a half stack, while adding more from the high gives you tone all the cutting edge it will ever need.

Bringing on the fullness of this little orange beast is as easy as flipping the switch to the saturated position. A gain stage is kicked in that brings out the shredder in both guitars. This pedal does not mask your guitar’s natural tone, and backing off the guitar’s volume control allows you a great clean sound with just a hint of distortion. Where the Duncanized 51 went from Boston era rock into modern solo territory, the PRS retained a bearded classic rock tone deep from the heart of Texas.

The End Line
It’s not often that you find a pedal with all these features, great design, and outstanding tone that doesn’t trump your rig. For less than a green picture of your favorite Uncle Franklin, this pedal has won a permanent position in my pedal collection.

In this day and age, products are so specialized that purchasing anything can make your mind spin. Guitar gear is no exception. There are so many options on the market that buying something as simple […]