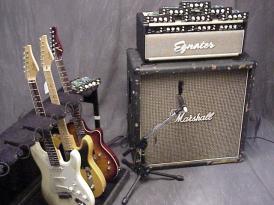 For many guitarists, collecting amps and pedals is more than just a hobby, it is most likely an obsession. A three by two foot area of your floor filled with assorted stompboxes, combo amps stacked on top of half-stacks with a/b/y splitters running cables to every single amp input, and all of those running to your mixer. It’s a beautiful site.

Unless you happen to be the wife of a guitarist, in which case it looks more like a fire hazard.

So how do you solve the dilemma of getting a wide assortment of amplifier tones without having to pile amplifiers in the corner of your living room (which is beginning to resemble Van Halen’s stage rig that has been hit by a tornado…or turned into the cat’s personal scratching post)?

First things first: ditch the cat. It’s destroying your amps and cables. And it smells worse than your drummer, Dave.

Second, you might want to check out the MOD 50 guitar amplifier from Egnater.

Egnater is a boutique amplifier company that makes some excellent sounding gear up in the not-so-exotic state of Michigan. The Egnater MOD 50 has one feature that is outstanding in the area of boutique amplifiers: the ability to use different modules to generate different amp tones.

First off, the MOD 50 is a full-featured amp that comes in either combo or head varieties, both of which allow you to run two different amp modules and give you the ability to switch between the two using a footswitch. In addition, each module has two separate channels, essentially giving you a four-channel amp (that conveniently only takes up the space of one amp, which may or may not make your wife cheer). The amp features two buffered effects loops that can be used together or separately, and a power switch that gives you three modes: standby, power (pushes the full 50 watts), and low power (which backs the amp down to 20 watts for smaller venues/recording/bedroom jamming). The MOD 50 is also a tube-driven amp, giving you a more natural warmth and clarity (which is a good thing).

There are currently nine different modules available for the MOD 50 amp (and also the M4 rack mounted preamp), giving you sound options that range from vintage California and classic British all the way up to dual-rectified monstrosities that, according to their website, are “not safe to be alone with your girlfriend”.

The Egnater MOD 50 provides just enough variety to satisfy your inner tone-freak while being almost pleasing to your wife (by reducing the amount of ‘clutter’ in your living room). There’s nothing like having a happy wife AND a great sounding amp. Visit www.egnateramps.com for more information.

Traynor has always been one of those amp companies that were a bit under the radar of many guitarists. Although they do not have the mass-market presence of Fender, Marshall, or some others, Traynor does […]