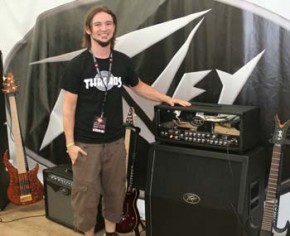 Peavey may not have the most recognizable or distinct guitar models, but they’re still among one of the most popular amplifier and electronics manufacturers to date.

The company is native to the state of Mississippi and has been praised by George Bush Senior for being an U.S. only based business–although that is no longer true, the company now has overseas factories–and their products are distributed to over 130 different countries across the globe.

Peavey Electronics was founded in 1964, by Hartley Peavey, who had built an amplifier because his dad wouldn’t buy him one. The company was jump-started a year later with $8,000 from Hartley’s remaining college fund. Despite the investments ($8,000 was a lot back then), the very first Peavey amplifiers were made in the basement of Hartley’s parents.

Hartley himself said the timing of creating his company couldn’t have been at a better time. In the mid 60s, the big guitar names were slowly acquired by huge corporations, thus the price of good amplifiers went up, but the quality went down. That is when Hartley decided to make the business serious, and bought a factory from $17,500 he borrowed. Beforehand, he had only moved from the basement to a “bigger space” – the attic of his father’s record store.

The business went well, and from 2 employees (Hartley himself and a salesman) in 1966, the company soon had over 150 employees in 1973. Two years later, the company started to manufacture guitars, albeit with mixed success. They mostly produced guitars as an answer to the bigger companies’ latest trend; selling amplifiers together with new guitars.

Today, Peavey has yet to break-in into the guitar market; the only significant models from Peavey were only marginally successful like the Wolfgang series electric guitars.

However, the fact that their amplifiers are used by myriad artists and even average guitar players does prove that Peavey knows what he’s doing after these 37 years. Hopefully, we will see new guitar models introduced by the company soon enough. And some prime amplifiers too, of course. Check out Peavey High Gain Amplifiers.

History of BC Rich Guitars

Whether its the hands of a sculpture, the pen of a writer, or a voice of a singer, the ability to shape an artistic medium contributes wildly to the captivating nature of art. Nowhere is […]