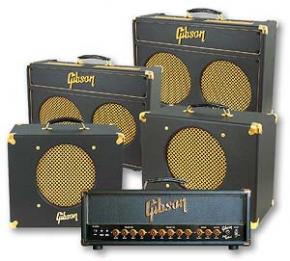 While Gibson is known primarily for making fine guitars, their amplifiers predate any Fender or Marshall amp by at least a decade. The company’s excellent tube amp offerings dried up in the Sixties, but with any luck, the introduction of the 1999 Goldtone series would hopefully be the beginning of putting Gibson amps back on the map.

Developed by Trace Elliot as the Velocette series, and renamed after Gibson bought up the company in 1998, the Goldtone series consist of the bare-bones GA-15, the reverb-adept GA-15RV and the comparatively maxed out GA-30RVS. Each amp was based on a 15-watt Class A circuit powered by EL-84 tubes, and came with nattily attired in soft brown leatherette with gold hardware.

Although it was the series’ flagship, the GA-30RVS offered just a trio of knobs) volume, tone and reverb) to perform most of the work. It’s really deceptively simple, though, because each control covers a wide range of territory. The volume knob can be pulled out for a hearty gain boost, and the tone control engages two potentiometers, allowing the bass setting to have a midrange boost that becomes scooped as the knob is turned toward treble. The resulting range is enormous, and useful at every point. The “pseudo-stereo,” three-spring Accutronics reverb can be controlled by a footswitch (included) and is well voiced and quite strong. Most players will find it useful in small doses, but ambient addicts could thrive on its cloud cover. Other features in the GA-30RVS include a bright switch, a hi input, a lo/link input that allows you to link in parallel to another amp and a stereo effects loop that operates in series or parallel and whose spread can be enhanced with the stereo outputs.

With its volume and tone knobs set for high noon, the Goldtone GA-30RVS kept a moderately clean attitude while putting out a hearty volume level. Engaging the bright switch brought subtle detail to the fore. With the gain circuit engaged and the volume knob leaning toward three o’ clock, the power and girth of the amp became jaw-dropping, while the beauty of the Class A circuit and the EL-84 tubes became very apparent. The highs were always present, yet never overbearing, and the signal remained warm and full, with just a hint of smudginess in the bass. At almost any setting, the mids kept their rich, wooden complexity, which is aided by the dual Celestion Vintage 30 speakers. If we had any gripes, they were with the Goldtone’s controls, which are located on the amps back panel. If you’re a “set-it-and-forget-it” kind of player, then you’ll understand all the praise the Gibson Goldtone series received.