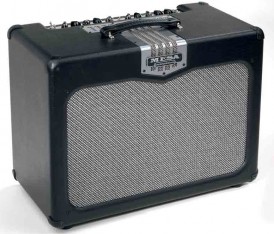 It wasn’t long ago when we first tested the Mesa TransAtlantic TA-15, well now bigger brother, the TA30, is here.  It’s called TransAtlantic because it spans classic British and US tones, specifically Vox-inspired when it comes to cleans and crunches in channel one.

Then in channel two it’s a brief sojourn into mid-gained Marshall territory (Hi One) flanked by Mesa Boogie’s more common post-Fender clean (Tweed) and high-gain tones (Hi Two), direct from the US of A: five modes in total.

The main rotary controls are straightforward; the only one requiring further explanation is the cut/master in channel one. When pulled out it’s a master volume for the channel, and when pushed in becomes tone cut (essentially a master presence) control very similar to what you’d find on a Vox AC30.

The volume pot then becomes solely responsible for pre- and power amp volume. Both the reverb and effects loop have channel-specific hard bypass switches if you want them completely absent from either or both channels.

When it’s not hard-bypassed on the front panel, you can switch the loop in and out with the supplied footswitch, and it is also possible to turn the reverb on and off remotely if you purchase an additional switch.

What that means is that you can access both the effects loop and reverb in any combination across the two channels.

Like the TA-15, you can’t fail to be impressed with the general styling of the TransAtlantic. Combo or head, the satin nickel metalwork, blue-backlit grilles and flawless finishing leaves you in no doubt these are meticulously made amplifiers. 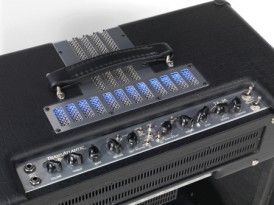 Inside it’s the same story; custom through-plated PCBs at the centre of a clever circuit that marries classic Vox and Fender influences. While that may sound simple in principle, to do it with real valve circuits that include both reverb and an effects loop is serious headache,given the vast differences in how an AC30 is configured compared with a Fender Bassman, for example.

Point-to-point wiring enthusiasts may scoff at the production line PCB approach, but Boogie’s Randall Smith and his team remain adamant that not only is this the best way to make amplifiers that are consistent and reliable, but it’s the only way.

Full marks are awarded for the padded gigbag for the head, and the padded cover for the combo. Fewer manufacturers are doing these nowadays, and at these prices, we expect it!

Sounds
Powered up, there’s a vast degree of difference in each of the five modes, so don’t be afraid to tweak. Channel one has a clear Voxy character as you’d expect, thanks as much to the preamp circuit as the cathode-biased EL84 power section with no negative feedback (an essential pairing for classic Vox tone).

Top Boost mode is more gainy than Normal, and really starts piling on level as you wind the volume up. Harmonically rich, chiming notes and chords abound, right into rock distortion with humbuckers.

In the 40-watt mode particularly this is a stronger tone than many a newer AC30, which can sound brittle at lower volumes. It ticks the boxes from ’60s pop to driving country, blues and Stratty Hankisms. 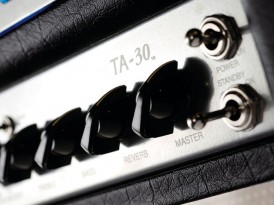 In full-power Dyna-Watt mode, the sheer attack of clean notes from either combo or head can be eye-popping, especially through Mesa Boogie’s custom tweaked and well-proven Celestion 90-watt speaker. Loud drummers, no problem. Busy mix, likewise.

We can’t imagine too many players wanting for more volume, though the headroom characteristics are obviously quite different from a four-6L6 100-watt amp. The 30-watt class A mode will still out-shout most drummers, but with increased elasticity from the power section when you push it hard.

If that’s too much, drop to 15 watts class A (two of the four EL84s) for much more clip and compression at the power stage – something notoriously difficult/impossible on a non- master volume AC30 these days without upsetting the soundman/landlord.

Channel two’s power stage is configured fixed bias with negative feedback (like most Fenders and Marshalls). Tweed mode kicks off with that fatter- than-you-remember-it Fender-inspired tone, but you really do need to wind it up to get things going.

With strong mids and urgent delivery, it’s more rounded than channel one and very familiar if you’ve played a Tweed Deluxe or low-power Twin. The bright reverb just makes it all the sweeter.

Hi One adds a huge level jump with extra gain too. There’s a tightened bottom end, which will appeal to humbucker players looking for some classic rock fun, or indeed darker/ bassier sounding guitars that can get muddy on the bottom: ES-335 players looking for excellent articulation take note. Angus Young is here should you need him, too.

Moving on to Hi Two brings a punch of mid-range focus and a swathe of bottom end back for something closer to what you’d think of as ‘classic’ Boogie leads. Tons of harmonics, plenty of gain and the addition of the boost function over the TA-15 means it’ll go more gainy in either of the Hi modes, obviously. 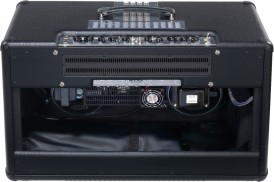 The lack of a dedicated middle control means that ’80s-inspired metal tones are better served from Mesa Boogie’s other amps, but heavy rockers will still find a lot to like. You can single-note solo all day here, with your choice of dynamics thanks to the three power settings.

The supplied 19-inch, open-backed 1 x 12 does a good all-round job with the head, but lacks the outright depth of the bigger combo box. The larger available 1 x 12 or 2 x 12 would be our choice for the head – a quick demo at Mesa HQ in April yielded a huge tonal spread from the 2 x 12.

Do try different cab formats, however, as it makes a significant difference to the resultant tone and all our tastes differ in that respect. And as tempting as it may seem, try not to skimp by pairing it with a cheap extension cab.

A quick demo of one of Mesa Boogie’s cabs alongside a lesser box will explain why immediately in terms of volume, clarity and tonal depth.

More power, added reverb (hooray!), an effects loop, and an extra boost mode in the second channel. Those are the on-paper differences between the TA-30 and its little brother. On the end of your guitar that adds up to a seriously versatile gigging amp.

The harmonically rich character of the classic Vox circuit receives an appropriate Mesa-hallmarked update in channel one, while channel two delivers a similarly tweaked adaptation of the ubiquitous Fender Tweed circuit that has informed so many amp milestones, from the Marshall Bluesbreaker to Mesa Boogie’s own Dual Rectifier.

With flexible power options that are as much about feel as out-and-out volume, the TA-30 in either head or combo format is an extremely compelling professional proposition.

Rivera’s Sedona is essentially two amps in a single package, but before you hit the next button on this page thinking that it’s just another two-channel combo, you should be aware that it is the […]