I sat down with Puddle of Mudd’s guitarist, Paul Phillips, 4 hours before the Traverse City, Michigan show at Ground Zero was about to kick off. I was on stage shooting some images of Paul’s equipment and talking with Paul’s tech guy, Sparky, before Paul showed up for our meeting. Sparky walked me through Paul’s equipment, how he tunes his guitars, how the rack equipment is all connected and showed me the night’s setlist, all of which I have taken pictures for you, the Gear-Vault readers, to see. 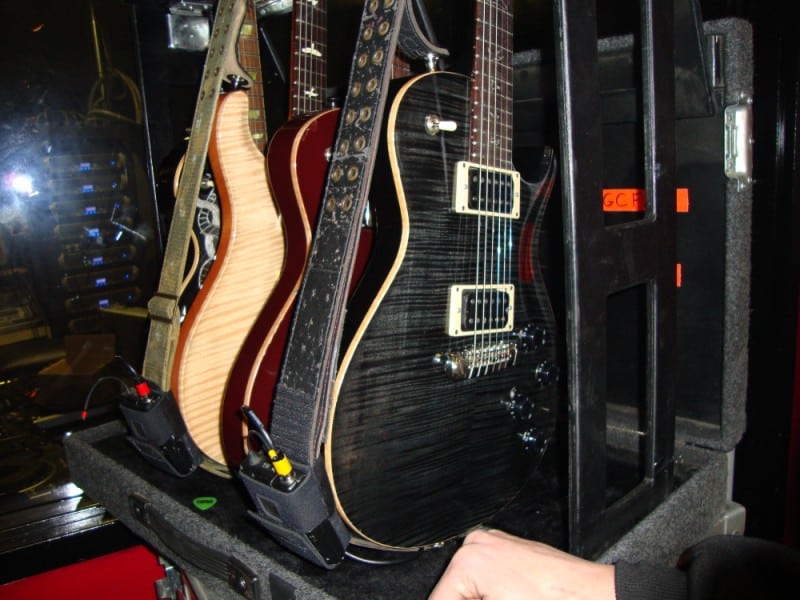 Paul showed up on stage during the photo shoot and he appeared enthused about talking gear with Gear-Vault.com. I stood up and shook his had and introduced myself. He was very calm, laid back and relaxed and was sipping on a Diet Coke. We walked off stage to a quiet table near the bar while having some idle chit-chat. The entire venue only had about 15 people in it and most were responsible for setting up Puddle of Mudd’s equipment.

Before the interview, Paul kicked off the meeting by asking some general questions like what city I live in and more background on Gear-Vault.com.

You started playing guitar when you were 15. What was the first gear that started you off?

Actually I first picked up the guitar when I was 11. I took some lessons and it [playing guitar] just kinda slipped. I picked up the guitar again when I was 15. My dad played guitar in a cover band and that got me back into it. My first guitar and amp were a Squier Strat and a small Peavey combo amp, I don’t remember what the name or model it was; I remember it was a small combo thing. I really loved cranking the distortion and volume up on that thing! [laughs]

What inspired you to play guitar?

When we finally got MTV in my area where we lived in Florida, I saw [rock] bands like Motley Crue and Guns N’ Roses just rocking it out. I knew I wanted to do that

Did you ever get up on stage with your dad?

I never went on stage with him. I did jam with him and with is friends when they came over. It was cool.

Who is your guitar idol? what famous guitar legend has made the biggest impact on your career or on you personally?

Oh man, there are so many. I’ll definitely have to say Slash and Dimebag are right up there.

What was the first riff you learned to play?

The first riff I learned? hmm, it probably was Iron Man [Black Sabbath] and One by Metallica. I remember playing Iron Man in the wrong key. Lol, but it was fun.

No, I’m pretty much self-taught. I played in bands and learned stuff from other guitarists, and watching my dad play and what he taught me. I just picked up on stuff.

What is your preference on gear; what draws you to a certain piece?

Are you a gear junkie? What’s a day of gear shopping like?

I wouldn’t say that I’m a gear junkie. I get stuff sent to me to try out. Some I like, some I don’t.

What’s in your personal collection?

How many guitars do you have?

How do you set up your guitars? Any custom work?

The guitars PRS send me are select artist woods and picked colors, but they’re pretty much stock how they are sent to me. They have stock pickups and everything.

What’s your preference for how your guitars are set-up; do you like high or low action?

I like low action. Pretty much the way PRS send them to me is perfect. [They don’t need tweaks or adjustments]

Any gear/guitars destroyed during a show?

[evil grin as he drops his head] I’m probably going to get in trouble for this one. Between the last two albums [Come Clean and Life on Display] I destroyed about 5 PRS out of frustration. Now PRS send me lower grade guitars. [laughs]

Teach you to get pissed off [laughs]

Story behind your snake guitar?

Oh yeah, I was thinking about that after you asked me if I had custom work done on any of my guitars. I bought that guitar to mess around with. I drew on it, took a blow torch and glued on the stars and stuff.

Are you endorsed by Gibson, too?

For all the readers out there, would you like to give a piece of advice inspiring guitarists out there?

Practice. Practice the stuff you use in your music. It’s easy to get way to caught up playing all over the fretboard and doing scales you’ll never use in your music. [Also] use a metronome; start off slow and build your speed. Play with other guitarists and drummers [bands] whenever you can.

Harmony Central Message Board Is Down

Harmony Central Message Board Is Down We’ve noticed that Harmony-Central music message forum is down due to having database error (s). We would like to take this opportunity to invite acapella.harmony-central.com forum members to join us at […]

When the phrase “guitar solo” comes to mind, you picture a guy just shredding apart a fretboard on stage to a crowd going absolutely crazy. This may hold true for some instances, but there are […]