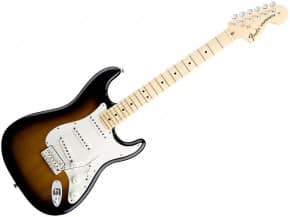 The phrase “Made in America” seems to have a lot more meaning these days than it did in previous years. A wave of nationalistic pride has swept the U.S. guitar market recently, as more and more imported instruments hit our shores. Many players aren’t interested in foreign-born guitars anymore, preferring to spend the extra bucks to get a U.S.-made guitar. Sometimes, however, you might not have to spend as much as you think to get a badass new instrument that was built right here in America, the land that gave birth to rock and roll.

Enter the new Fender American Special Stratocaster. The American Special series by Fender is designed to put American guitar quality into the hands of the guitarist on the street, not just the elite few who can afford Custom Shop creations. The American Special is built on an Alder body with a gloss urethane finish in two-tone sunburst or candy red and a maple neck and fingerboard with 22 jumbo frets, a 9.5” radius, and a modern “C” profile.

Other cool features of the American Special are many: a large 70’s-style headstock and logo, three Texas Special pickups coupled with Fender’s Greasebucket tone circuit that allows the guitars’ high-end to be rolled off without increasing the bass, a vintage-style trem, and chrome hardware. A gig bag is also included.

The best feature of this guitar, as any instrument shopper will tell you, is the price. With a retail of $1099.00 and a street of $799.00, the American Special is easy to bring home, even by your wife’s standards. An instrument at this price that is American-made gives real competition to import guitars everywhere and gives guitarists pause to think about how much quality they can truly afford.

Tommy Bolin may be remembered as the guitarist who replaced Ritchie Blackmore in Deep Purple during the Seventies. But while this accomplishment alone would guarantee him a small footnote in rock history, he remains revered […]

I’m a little late to the party, but thought this was something worth posting. I thought it was a classy move by both Fender and Gibson guitars. Below are the press releases and images of […]