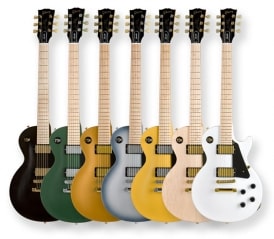 Gibson Les Paul Studio Raw Power Maple, Natural Satin is inspired by the popular but short-lived Raw Power Les Paul of 2000-2001. The newly revitalized series of 2009 in a dressed-down styling and meaty performance package that so many players loved in the original release, but with notable added features to update the theme.

The Gibson Les Paul Studio Raw Power Maple follow the no-nonsense ethos of Gibson’s popular Studio series, and their down-to-business looks are packed with performance features that the hard-gigging modern musician will appreciate. These is a grab’n’go workhorse guitar for tone-conscious rock and blues artists, and they wear their attitude on their sleeves.

The Gibson Les Paul Studio Raw Power feature unbound solid maple bodies, with a traditional carved top on the former. This sturdy tonewood offers a clear, well-defined sonic response, as well as looking great with minimal cosmetic treatment. The solid mahogany neck is topped with an unbound maple fretboard, which is dressed with simple dot position markers, and graced with a traditional trapezoid marker at the 12th fret.

Advanced electronics on the Gibson Les Paul Studio Raw Power speak volumes about their intentions. A pair of 57 Classic humbucking pickups offer a broad appeal for a wide range of playing styles. One of Gibson’s most popular pickups of all time, the 57 Classics employ Alnico II magnets, vintage enamel coated wire, nickel-plated pole pieces, nickel slugs, maple spacers and vintage-style, two-conductor, braided wiring, just like the legendary PAFs that they are based on. In a variation from the majority of original PAFs, however, the ’57 Classics’ coils are wax potted to combat microphony and feedback squeal at high volumes so, while vintage voiced, they are also suited to high-gain playing.

Gibson’s Tune-O-Matic bridge and stop bar tailpiece pairing aid tuning stability and enhance sustain, while green-key Grover Kluson-style tuners add subtle vintage elegance to their superior performance. A Corian nut helps to ensure excellent resonance and sustain, as well as hitch-free performance. The Gibson Les Paul Raw Power features a glued-in set neck and is built to Gibson’s traditional 24 3/4″ scale length, with a neck width of 1 11/16″ at the nut. Equipped with a Gibson gig bag, the Les Paul Raw Power is ready to hit the road and roll.