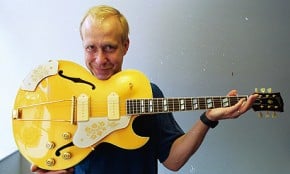 Gibson Guitars has been under a lot of scrutiny lately for the Fender Hendrix Strat, building some ugly guitars and now they are being investigated by the US Police for “smuggling wood”.

Gibson Guitars is under investigation for alleged use of smuggled wood. US federal agents raided a Gibson factory on Tuesday, claiming that they may have used illegal rosewood to make their guitars.

The US Fish and Wildlife Service seized wood, computers, files and guitars from Gibson’s Massman Road manufacturing facility in Nashville, Tennessee. They are seeking evidence that Gibson shipped illegal rosewood from Madagascar via Germany.

Rosewood is expensive – more than double the cost of mahogany – and a crucial component in many guitars. Even at £3,000 per cubic metre, it can be found in acoustic guitar bodies and fingerboards. The troubled east African island of Madagascar, is a prime exporter of the hardwood. But due to corruption and environmental issues, Madagascan rosewood is a dubious proposition, and America’s Lacey Act bars firms from bringing it into the US.

Gibson promised that they are “fully co-operating” with the federal investigation. “Gibson is a chain of custody certified buyers that purchases wood from legal suppliers who are to follow all standards,” the company said. Gibson CEO Henry Juszkiewicz sits on the board of the Rainforest Alliance, which lobbies for sustainable forestry. Guess Gibson should have stuck to the Exotic Smartwood.

Thanks for the report: www.guardian.co.uk

Trisha Lurie from California for making Les Paul Girl Tell us about your musical experience Well, I am a singer songwriter, guitarist.. a rock girl all the way. Worked with a few different bands but […]

Les Paul–arguably the most influential and innovative guitarist and inventor of musical technology in history, passed away August 13th, 2009 from complications that resulted from a severe bout of pneumonia at White Plains Hospital in […]