Both here at GearVault and elsewhere in the guitar playing community, the name Malden has been developing a great deal of hype in the last several years. The company first gained widespread exposure through their December 2010 closeout deal. During this deal, Malden practically gave away their entire preexisting stock, which had been created somewhere in Asia. They then reinvented themselves in New Mexico as a high end, American boutique brand with a state of the art custom shop. It would be during their first tender months pumping out guitars through their custom shop that I initially came into contact with the company.

Soon (very soon to be honest) after I had seen a local listing for a perfect condition Malden Mozak, I became enamored. Originally in the market for a new Tele or some sort of hollow-body, the sleek Jazzmaster style design of the Mozak unexpectedly piqued my interests, and nearly two years later I do not regret my decision at all. I’m giving this history to explain the bias I have in this review; however, I will try and make it as fair as possible. This review will be conducted using a Vox Valvetronix AD60, though the focus of this review will be much more on the aesthetic and natural sound of the guitar. Now that that’s out of the way, let’s dive into and explore this stellar guitar.

To begin, let’s examine body of this Malden (and just ignore the strap I purchased in 6th grade). 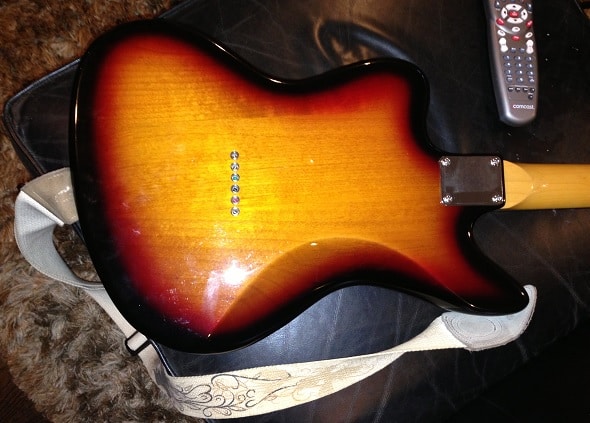 The body of this guitar consists of a small part basswood and a large part alder. Which part of the guitar is which wood can easily be determined by looking for grains in the wood; basswood is an infamously soft wood with no grain, but alder has long, pronounced grains. Though basswood rightfully retains an association with mass produced, cheap guitars, the warmth and mid-heavy sound it lends the tone wonderfully clashes with the pronounced highs of the alder. Of course, alder and basswood are a classic combination of tonewoods, as both types are light, porous, and frankly just look good together. 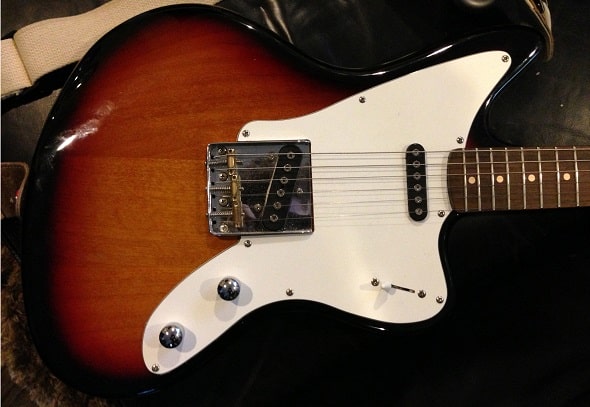 I think for me, and likely for most Mozak aficionados, it was the body shape that sold the guitar. Though obviously inspired by the classic design of the Jazzmaster, the Mozak has a more lobed bottom and a slightly more pronounced cutaway. The ashtray pickups also start a good bit further up the guitar than on its Fender Jazzmaster counterpart. In short, the body is what makes this a stellar guitar; in my personal experience it has been the body that prompted most people to ask me about my Mozak. 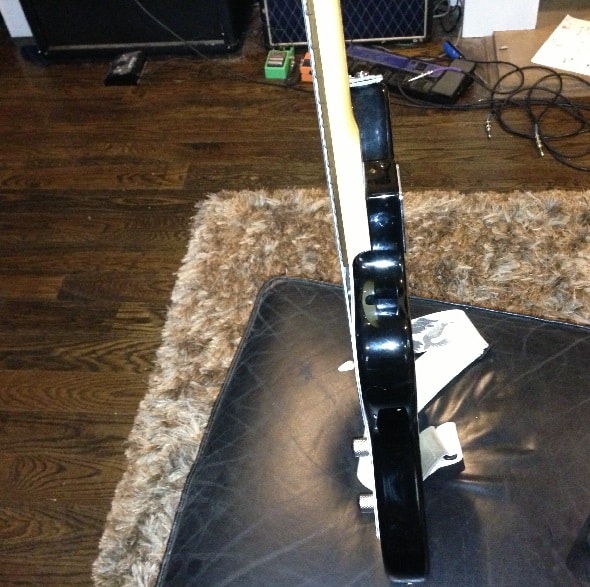 The obligatory side picture shows this guitar is more or less average in width, which is comforting. Though it is tough to identify in the above picture, the comfort contour body is quite similar to those found on other Fender Jazzmasters or Strats, and provide about the same level of comfort. The neck does not come off the body in nearly as odd of an angle as the above picture makes it seem, though of course there is a slight angle.

The neck of the Malden is constructed of a maple back and a rosewood fretboard. 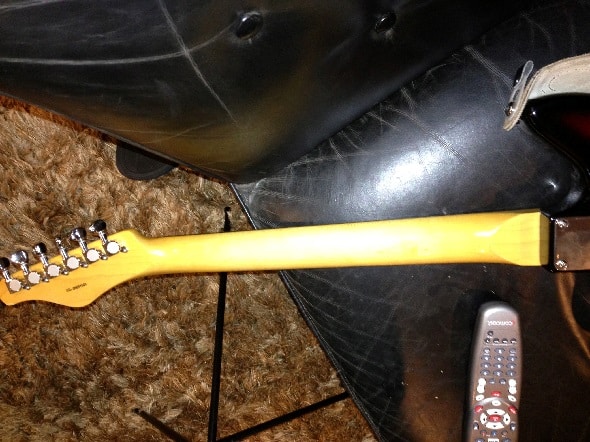 Maple is considered the classic neck wood, and for good reason. The unique tonal characteristics of this extremely sturdy wood not only go well with nearly any combination of body woods, but also seem to largely negate the differences between bolt on and set in necks.

If maple is one classic neck-specific tonewood, it seems rosewood would be the other. Rosewood is an extremely common choice for fretboards because its oily surface is ideally suited for long sustains and bends. 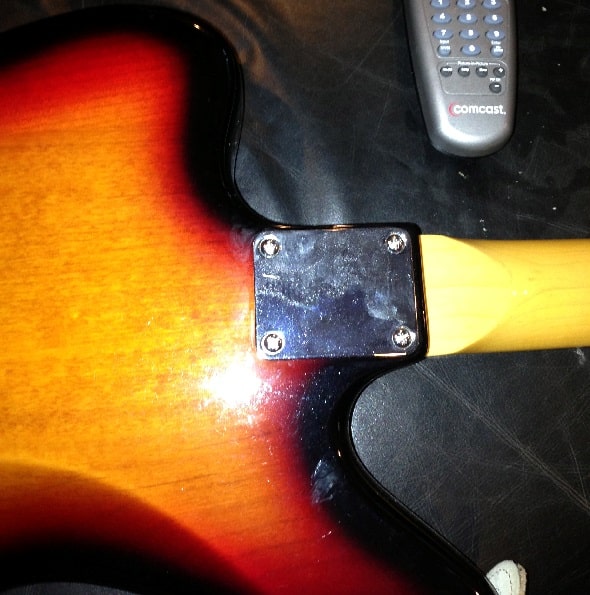 The neck is connected to the body using a bolt on system; although the use of maple in the neck does make this slightly irrelevant. However, that classic twang of a bolt on neck can still be heard in the sound, even if it is muffled. Many guitarists might associate this twang with cheaply made guitars, but when used correctly the twang actually can add a lot to the sound. For instance, I have replaced the electronics and pickups in this Malden with some from a high end G&L ASAT guitar, which really gives the guitar that classic Tele growl.

Overall, the neck is good, which is why it got a 7 out 10, but is not particularly unique. This is not the first and definitely will not be the last rosewood and maple neck I come across, and although all of them play differently, much about each is the same.

Before I changed out the pickups and electronics in my Mozak, I played for several months using the stock parts, and will try to give a fair review based on that. The Mozak features a pair of single coil Alcino V pickups. The classic hum and raw power of single coil pickups is definitely inherent in this guitar, and the added power of the Alcino V’s is certainly not an unwelcome reinforcement. In short, this guitar rocks. It can get loud, but it can be soft and sweet too. 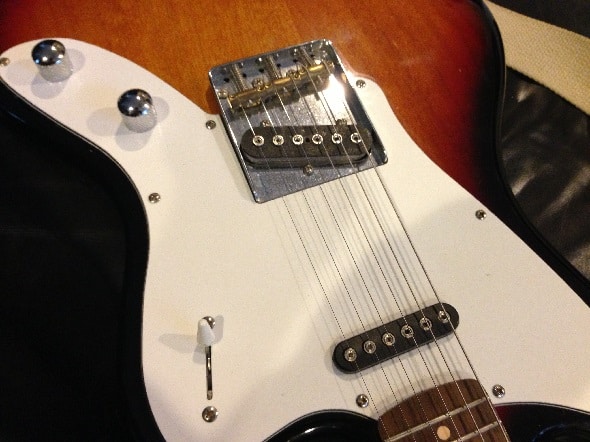 My absolute favorite part about this guitar is the ashtray style pickups. Something about the large metal plate holding the bridge and the angled body pickup just looks so classy and sophisticated. I once read an online review of the Mozak that claimed the guitar was the sort of thing one might have found Muddy Waters pounding on back in his heyday; I believe the ashtray style pickups are directly responsible for that comparison. 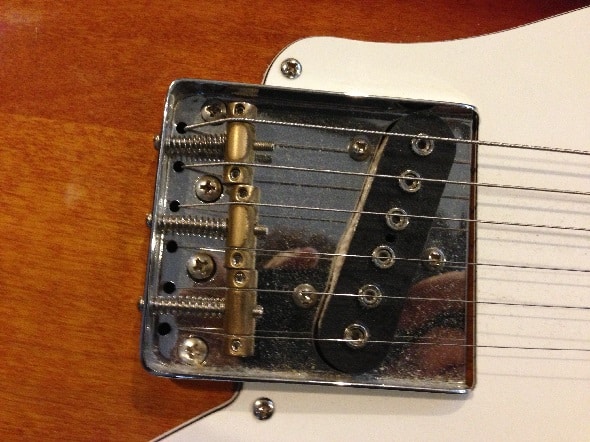 The rest of the electronics are fairly standard, with chrome knobs and a sliding three way pickup selector. One thing I will add is the knobs do a quite accurate job of controlling the volume. If the knobs were numbered one through ten, the entire 2-9 volume range perfectly follows the change in volume.

Playability is not something that can simply be shown through pictures or verbal descriptions, and honestly the best way to assess the playability of a Mozak is simply to play one. In my experience though, the guitar plays smooth and warm. I often use it in blues settings, and the natural warmth and sustain of the Mozak oozes through almost any set up. Without any changes to the stock set up, the action is low but does not buzz.

Overall, the aesthetics of the guitar are more matched by its functionality. The Mozak is an extremely diverse guitar that can be used in a huge variety of settings. But this mean this guitar is right for you? Well the only way to find out is to go out and play one, something this author for one wholeheartedly encourages. Be sure to leave a comment and let us know just what your experience with Malden products was like.

Listen to the Malden Mozak guitar in action

Last week we wrote a piece asking, you, the reader, if Xaviere Guitars are junk. The responses we received in the comment section was significant to our research and the debate was a great success. […]