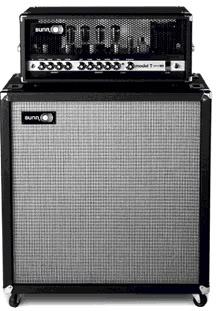 Like all great inventions, the first Sunn amps were born of necessity. After the Kingmen stormed the charts in 1963 with their megahit “Louie, Louie,” the group’s bassist, Norm Sundholm, found that his amp wasn’t nearly loud enough for the large venues into wich his band was suddenly booked. He turned his brother Conrad for help, and by 1964 the pair had designed the world’s first high powered bass amp. The next year, with rock experiencing a massive growth spurt, their Sun Musical Equipment Company was well on its way to a place in the rock music history books, supplying rock band from Cream and the Who to Queen and Kiss with thundering stacks of loud, reliable gear. Now, over a quarter-century after its birth, Sunn, which was purchased by Fender in 1985, is taking a second stab at rock greatness. If the Model T is any indication of great things, just look at some of the equipment Sunn had pulled off.

While the 100-watt, 6L6-powered Model T and it accompanying Model T (.pdf manual) preserve the cool, shit-kickin’ look of Sunn of yore, its intelligent, flexible design and terrifying roar are anything but retro. The Model T features two independent channels that each feature a no-nonsense complement of controls: Channel one has knobs for volume, treble, middle and bass, while channel two adds a gain knob for dialing in the desired level of crunch; both channels share a presence control.

The rear panel boasts the usual array of speaker output jacks, a very welcome XLR out for direct recording and a handy “area/club” switch that shifts the amp to 25-watt low-power mode for use in more intimate-size venues. The rear panel also houses the send and return jacks for the Model T’s fottswitchable effects loop. For players who prefer to apply differing levels of signal processing to their clean and dirty tones, the amp has dedicated send and return level controls on each channel, and the loop is assignable to either or both channels, with a different dry/wet mix for each.

But while good looks, half-power switches and flexible effects routing are all well and good, they won’t get you very far if your amp blows up. To that end, the designers of the Model T have built in an excellent little feature that could very well save your life (or at least your career). Two LEDs indicate that status of the amp’s two pair of Groove Tubes 6L6 power tubes. If all is well, both LEDs shine green; if any of the four tubes fail, the amplifier automatically shuts down the tube with which it is paired and continues to function at half power, a status indicated by a red LED. This feature is quite comforting on high-stress gigs—especially if you don’t have an army of techs at your disposal and a backup amp fired up and ready to go.

Strapping on a PAF-loaded ’59 Les Paul Reissue and running the Model T through its Celestion 12T-75 loaded 4×12 speaker enclosure, I found it hard not to like the amp’s clean channel. Especially in 25-watt “club” mode, this channel produces springy, responsive tones that chime and pop without a hint of harshness. Cranking the clean channel’s volume in this mode yields wonderfully, AC/DC-style power section crunch, while pegging the clean channel at full power (do not try this if your landlady is cranky) was reminiscent of whacking away with a good ol’ Hiwatt set for maximum r&b. To my ears, the Model T’s crunch channel sounds like the happy wedding of a really good Marshall JCM800 and a Mesa Boogie Dual Rectifier, delivering oodles of gain with tight, punishing low end and open, airy highs. I found that the gain control was a little drastic in the first part of its throw, sending the amp into full-out crunch at settings of 3 or higher. This little quirk is fine if you’re a gain-monger, but players looking for more-subtle “in-between” sounds may find it a little frustrating to find the sweet spot. Despite its hotter-than-hell preamp section, the Model T is also extremely responsive and cleans up exceptionally well when the guitar’s volume is backed off. Players skilled at manipulating their instruments’ controls will find that, with the two channels and a little finesse, almost any rock tone can be coaxed from this head.

Do they sound nearly identical to you? If not, which one sounds best to your ears? Please leave your comments below.

The Victoria Amplifier Company is known far and wide for crafting some of the finest tube amps available today. Company founder/tone guru Mark Baier has a sterling reputation for his 50’s Fender Tweed recreations as […]