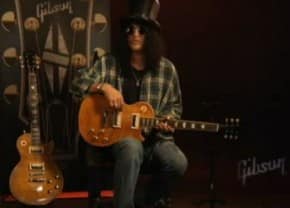 Eternally top-hatted former Guns N’ Roses guitarist Slash is one of the most iconic guitarists of our time and, in some circles, is considered one of the last true guitar heroes. When he burst onto the rock scene in the 80’s, Slash immediately became a poster boy for Gibson guitars and the Les Paul model, as much of the world was playing then-current super strat-type axes like Kramers, Charvels, and the like.

In honor of his ongoing Les Paul use, Gibson has made a Slash model, which seems like a very nice guitar. It has all the features and specs that LP guys like, a beautiful amber flamed top, and a cool Slash logo on the headstock. So what’s the problem? Well, legend has it that when Slash tracked Appetite For Destruction he was using a replica of a Les Paul, not an actual Gibson. In fact, there are a couple of replica Les Pauls that he toured and recorded with in the original Guns period, one made by Max Guitars in Hollywood and one made by luthier Kris Derrig. The video for “Welcome To The Jungle”, which is where most of us saw Slash for the first time, shows him playing the Max guitar. So is Gibson selling what amounts to be a copy of a copy for the better part of $5000?

The official company line is that the Appetite LP is a recreation of one of two 1988 Les Pauls that Gibson gave Slash that year. That may very well be true, but naming the new guitar after an album that it was not used on is kind of misleading. This is got to be a sensitive issue around the ol’ Gibson shop but I feel it is something that should be addressed. A quick bit of Google-ing turns many details about Slash and the gear he used in his early days, and the guitars that come up over and over are the Max and the Derrig.

We are use to this sort of revisionist history in politics and other parts of life, but don’t usually see it in our little guitar world. It seems that this is just another Gibson ploy to pimp another high-priced signature guitar to the more-money-than-brains crowd. Admittedly, this seems kind of tame compared to Aaron Lewis from Staind getting a signature model that costs 17K and the whole Jimi Hendrix mess of last year, but it just leaves me with the feeling that Gibson will do anything to sell a guitar for more than it is worth. I don’t know about you, but all this kind of stuff makes me want to do is buy a Paul Reed Smith.

The Gibson Holy V Guitar – Only 1000 Being Made

Having come up with such guitars as the Les Paul and Flying V, among others, Gibson is known for innovation, creativity and spirit. The Gibson Holy-V is a representation of this continuing ingenuity, with its […]

Down through history, people have constantly been in search of the next big thing. From the car, to the washing machine, the compact disc to the iPod, many things are thrown at the wall, but […]

Randy Rhoads had one of the shortest but brightest runs at the top of the rock and roll game. His body of work with Ozzy Osbourne has stood the test of time and still provides […]