The fun started with the Korg D8, which is by far the smallest of the three recorders I sampled for this series of reviews. If you weren’t looking at it too closely, you might mistake it for a drum machine rather than a portable eight-track studio. Its appearance, however, is deceptive, for inside the Korg D8 is a 1.4 GB hard drive, which allows a maximum of 34 minutes of eight-track recording.

All of these units record on an internal hard drive, which isn’t designed to be removed and replaced like tape formats. Instead, when the disk is full or you’re switching projects, you transfer the data to another source. A SCSI port for connecting external disk drives, an S/P DIF digital interface for a DAT or MD recorder, and standard RCA analog outs are all provided for this purpose. 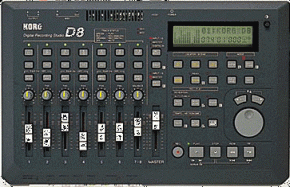 The Korg D8 features a built-in 12-channel, four-bus mixer, which has two ¼-inch TRS balanced analog inputs, with a high/low impedance switch that works for both, as well as MIDI In and Out. While the recorder boasts eight tracks, a glance at the board will reveal only seven separate track faders; the seventh is labeled 7/8 and is designed to be used in stereo, which is helpful if you want to send both inputs to one track or bounce a bunch of tracks while keeping all their pre-fixed pan positions.

Unlike tape machines, hard drive recorders won’t simply start rolling from scratch on empty space when you press Record—you have to let the machine know what you’re doing first by designating that empty space. Every machine has a different name for this process. On the Korg it’s called, simply enough, creating a New Song. In any case, it’s quick and easy. Once the initial stage is through, recording on the Korg D8 is quite simple. Just plugin, press Track Select button for the track you’re recording to (the light above it should blink red if you’re going analog, orange if the input’s digital), set the levels with the fader, fiddle with the EQ if you like (there are two bands, accessible via the EQ button), press Record and Play together and you’re off.

Of course, there’s a lot more you can do with tracks on the Korg D8 than just recording them and playing them back. If you want to keep a steady beat, you can turn on the built-in metronome, which can be set to any number of different rhythms, tempos, and time signatures. You can also set the tempo using the Tap Tempo function, which is helpful if you think you’ll be editing later, or input MIDI Clock data from an external sequencer or drum machine. If you want to add effects at the recording or mixing stage, there are 65 programs onboard, with 65 additional spaces for user memory. Many of these effects, especially the delays, are surprisingly good; some, like the distortion sounds, won’t have you throwing away your stompboxes any time soon.

The editing power available on the Korg D8 is quite impressive. By selecting parts of a song or track with the three locator buttons, you can orchestrate perfect auto punch-ins and outs, transfer apart from on track to another, move complete sections of a track from one part of a song to another, and even rearrange a song entirely. The locator buttons also help when you’re mixing: at this stage, you can select a certain part of a song and store its mix positions as a “scene” in the machine’s memory. Up to 20 scenes can be stored consecutively in each song, allowing you to automate your mix. And if you make a mistake during recording, mixing or editing, that wonderful invention called the Undo button can be a big help, reinstating your previous effort with miraculous speed.

The Korg D8 offers a wonderful array of features—perhaps too many for such a small unit. Its biggest flaw is its tiny gray LCD display screen, much like that of a digital watch, which can’t be read unless you’re right on top of it. This makes it difficult to check levels when you’re recording yourself, particularly if you’re playing an acoustic instrument and can’t move away from the microphone—and it was really my only gripe with this versatile, easy-to-use unit.