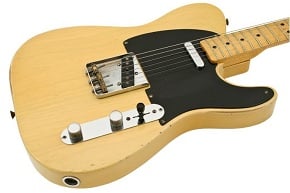 The Fender Telecaster is seen by many as the primordial electric guitar. Sure, one can argue that Paul Bigsby was also developing solid body instruments at the same time and in the same general area as Leo Fender but it is the Telecaster that is generally accepted as the first production solid guitar and the start of the modern guitar manufacturing business. Since its debut in 1952 (although the same guitar really hit the streets in 1948 as the Broadcaster but had to undergo a name change due to a lawsuit by the Gretsch company for using its trademark), the humble Tele has become one of the worlds’ most popular and enduring guitars. It can be seen on stages both large and small generating every type of music under the sun and is the weapon of choice for a wide range of pickers from James Burton to John 5. It is also the only guitar to have a style of playing associated with it. Tell most guitar fans that you are a Telecaster player and most will take that to mean that you play a style that mixes American roots influences like country, blues, jazz, and early rock and roll together in a blender to arrive at a sound and style that is reminiscent of players like Danny Gatton, Roy Buchannan, Albert Lee, and a ton of obscure hot-lick artists around the world.

The first Teles were butterscotch blonde in color with a black pickguard, now often referred to as ‘Blackguards’, and are among the most iconic guitars ever produced. The simplicity of their design shows the true genius of Leo Fender and is probably one of the main reasons the Tele has never gone out of production since it first hit the streets. Most guitars made at this time were made in a labor-intensive almost artist-like way and featured multiple types of woods, glued-in necks, lots of binding and inlay, and hollow bodies, like Gibson’s and early ‘New York’ Epiphones. The thought of the Telecasters’ one-piece maple neck and fingerboard bolted to its swamp ash or alder body was radical and new and made the guitar both simple to produce and to service in the field. The single-coil pickups set into all of this produced a sound that is biting, full of treble, and instantly identifiable. Treble and twang have always been hallmarks of the Telecaster sound and remain so to the present day. The guitars also had a lot of sustain to them, partly because of Fenders’ idea of anchoring the strings in the guitar body itself, rather than using a top-mounted bridge and tailpiece combination like Gibson and Gretsch.

As the 1950’s progressed, the color of the Telecaster became more of a white transparent blonde and was matched with a white pickguard. The rest of the design remained largely unchanged, however, save for a brief period in the late 50’s when Fender abandoned the string-through-body idea and used a top-loading bridge. Fender soon went back to the original design and, for the most part, has kept to it ever since. Fender guitars became a little more sophisticated near the end of the 50’s and, like most of the models in the line, the Telecaster got a rosewood fingerboard at this time. This made the neck a two-piece affair for the first time and gave the guitar a little darker sound, although the bridge pickups still had plenty of twang on tap. Fender also introduced the Telecaster Custom at this time with the aim of making a more upscale guitar for those who wanted one. The Custom had the rosewood board like all Teles but also featured a sunburst finish and binding around both the top and the back edge. This made for a more visually attractive guitar that could compare to a Gibson and its old-school cool. The rosewood board Tele was the main design for most of the 1960’s, the only major change being the move from the early 60’s thick rosewood slab fingerboard to the later and thinner veneer board. In the later 60’s, Fender once again offered the Telecaster with a maple finger board, but this time the neck and the board were separate pieces of wood glued together and are referred to as ‘maple cap’ necks. A new model, the Telecaster Thinline, was introduced in the late 60’s and was all about its new mahogany semi-hollow body complete with F-hole and was designed to make the guitar a bit lighter in weight. The choice of mahogany for the body also warms the sound a bit, which some players became fans of.

The 1970’s saw the Telecaster keep on truckin’ in pretty much the same form as it had. A few new models came to light during this decade, including the second-generation Telecaster Custom with a humbucking pickup in the neck position, The Telecaster Deluxe with its two humbuckers and Gibson-style four knob control layout, and a later version of the Telecaster Thinline, also with two humbuckers. All of these guitars found their fans in the guitar marketplace and remain popular to this day. The 1980’s saw more of the same, especially after Fender got the Telecaster Elite and its weirdness out of its system. Fender realized that what people wanted and loved were the older-style Fender guitars and now, thanks to a change in company ownership, was able to put those designs back into production again as vintage reissue guitars, the first of which was the ’52 Telecaster. This move set the stage for what the Fender company and its guitars would become in the modern era and the popularity of the reissues ensures that anyone who wants an original-style Fender Telecaster will always be able to get one. Now, there are reissues of many different guitars from the Telecasters’ glorious past, as well as reissue Strats, Jazzmasters, amplifiers, and just about everything Fender ever made. These days, players have a ton of Telecaster models to choose from, ranging from simple Squier and made-in-Mexico instruments to high-end Fender Custom Shop dream machines. You can get a re-creation of an early Blackguard that sounds like an old Stones record or you can get a more modern version of the Telecaster with larger frets, a flatter fret board, noiseless pickups, and the Master Design neck heel for better high-fret access.

What makes the Telecaster so popular and why has it endured as long as it has? The simplicity of the guitar is part of it, as is the unique and twangy sound, but there really is something else. Like the other iconic guitars from the 1950’s, the Fender Stratocaster and Gibson Les Paul, the Telecasters’ genius lies in its forward-compatibility. It was able to play the music that was popular at the time it was introduced very well but it was also able to adapt to every style of music that followed just as well. You will find players using the Telecaster for jazz, country, blues, hard rock, heavy metal, pop, reggae, funk, avant garde, and any other style you can imagine. It remained relevant in every new decade and played whatever was asked of it. Many of the guitars of decades past fell out of favor because they couldn’t play more modern styles of music and became evolutionary dead ends. Try playing loud, drop-tuned heavy metal on a Gibson ES-330 or Gretsch 6120 and you will see what I mean. Through it all, the Telecaster has stood tall, sounded great, and remained cool. It is the ultimate straight-ahead, no-frills, working man’s’ guitar and playing one tells your audience that you mean business. Playing a Tele is really a battle of man versus machine and they are sometimes seen as unforgiving, due to their simple nature, for those used to the guitars of today. If you can rock one, however, the sound you create and the feeling you get are unforgettable and, soon after, you may start to wonder why you ever played anything else.

Before there was punk, there was Pete Townshend. No one in the music world prior to Pete Townshend was so able to channel young rage into aggressive and fierce guitar playing. Certainly people like Clapton […]