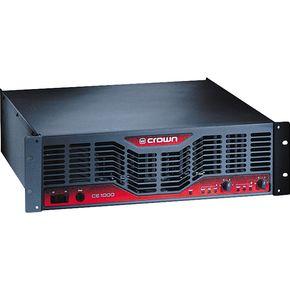 Crown is another name with a solid rep among pros the world over. The CE series seems designed for the first-time buyer or musician who has been forced to be a soundman without actually being a soundman. Hence the colorful, informative and sometimes even playful owner’s manual, chock full of tips and other useful info.

The three-rackspace steel chassis is as rugged as you might expect but weighs a manageable 40.3 pounds; rear rack ears are included. The amp vents front and back but is shallower than most, so you can house it in shallow or wallmount racks without blocking the rear exhaust fan. Crown offers a three-year warranty.

The CE 1000 provides 400 watts per channel in stereo 8-ohm mode and up to 1950 watts in bridge-mono at 4 ohms. The reported frequency response is 20 Hz-20 kHz. Connections on the back include a barrier strip and ¼-inch phone or XLR inputs, all balanced or unbalanced. Outputs are via Neutrik’s Speakon connectors, which don’t come with the amp, so make sure you buy them before you leave the store. The rear also houses the mode switch and input sensitivity switch, which lets you optimize performance to the output of your mixer.

Individual volume, power, breaker reset and indicator lights all reside up front. Among the CE 10000’s coolest features are controls that can be removed to prevent unauthorized tweaking.

Advertisement————————————
————————————————————
The Crown makes moderate ambient noise under power but sounds clean through the speakers and doesn’t pop on power down. In our limited tests, the Crown delivered clear response and plenty of headroom with nice distinction between low-and-high frequency content, improving the bass response of our little JBLs.

Simple, rugged and pretty too, the Crown seems equally at home on stage or in the studio.

Gear-Vault Classifieds is an eBay alternative. Come sell your used music equipment with us for free!

Jet City Amplification was formed in September 2009 with the goal of delivering guitar products to players seeking high-quality amplification products without the big price tags typically attached to boutique offerings. These days, a lot […]