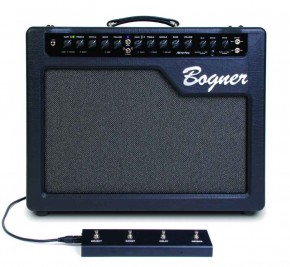 In 1989, Reinhold Bogner made a life-changing decision by moving to Los Angeles from his homeland in Germany. While in Los Angeles, Bogner made a name for himself with his innovative style and his ingenious guitar sound.

Bogner helped many musicians with modifications and repairs. Allan Holdsworth, Steve Vai, and Steve Stevens were just some of the musicians Bogner helped along his journey. It was not until Bogner encountered Eddie Van Halen’s #1 Marshall Plexi (overhauling and revitalizing it) to Eddie’s satisfaction, then his real triumph had begun. With his success of Van Halen and others, it helped shape the reputation of Bogner Amplification.

The way Bogner amps are constructed is pure perfection. Each amp is built to the same standards; amazing craftsmanship, a sophisticated arrangement of simple circuits, currents, metal, and wood. The final product is a flexible amp with a number of effects and tonal choices, not to mention very precise controls. This unique breed of design allows musicians to have definitive authority over their tone and sound. The Alchemist has shown no mercy either.

The Bogner Alchemist features a matched pair of 6L6 power tubes and five 12AX7 preamp tubes. On all Alchemist models, you will find two channels; “Gold”—channel one—and “Mercury”—channel two. The Gold channel (left) includes a clean start and gears up to sizzling tones as the CRUNCH switch is enabled. The crunch channel breaks up like tweed but has the low-end similar to a Hiwatt—an extraordinary rhythm or blues channel. The Mercury channel picks up from there, offering a crunchier rhythm and lead tone; from the famous white-hot Bogner gain. Both channels have controls for Treble, Middle, Bass, Volume and Gain so you can customize each channel to your distinctive taste.

The Alchemist offers three different modes, from Ducking, Analog and Tape (Ducking is a digital delay). The mix level is one of the coolest things since sliced bread. This feature is designed to automatically respond to your playing volume, reducing the level of the delay while you are playing, and increasing the level when you stop. The analog delay setting is a model of the classic analog delay pedal, providing a personality-warm, classically-rich sound with subtle modulation. The tape delay provides classic darkening echoes and organic variations of types of classic tape echo units. In addition, the built-in reverb effects feature studio-grade-digital-processing. The 3-position switch has three choices: Plate, Spring and Hall.

If you’re looking for an ear-splitting crunch, an amicable touch of the Brown sound or classic cleans that would make a Fender amp blush, it all can be found under the hood of Bogner’s latest creation, the Alchemist. Like all its other ancestors, each and every Alchemist has Reinhold’s stamp of approval and signature configurations. With all of his sweat, time and hard work devoted to his projects, Reinhold can only hope for one thing upon plugging into his latest amplifier. “I hope it will inspire you.” 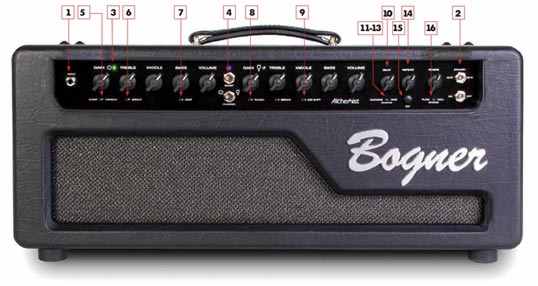 2. Power Switches – The upper switch chooses the full power (40W) or low power (20W) mode, and sets the amp to standby (power on, but power amp is not driving the speaker). The lower switch turns the amp on/off.

3. Gain Lights – When the Footswitch is enabled, these easy to see LED lights will easily distinguish which Channel you’re on.

4. Boost – (Gold) this will slightly increase your volume, but thicken your tone with mid-low increases. (Mercury) fattens your tone and pushes the gain without significantly changing volume.

5. Clean/Crunch – (Gold) Clean mode stays pretty clean with an open sound Fender Amps. The Crunch channel breaks up like a Tweed but has a bottom end for a great rhythm or blues channel.

6. Bright– Both channels have their own bright switch, to customize the channel for your guitar.

8. Punch – Switched to the left, this will give mid-gain rhythm and lead tones with a Fender-style tone. Switch it right for more of a British, high gain flavor.

9. Mid Shift –Switched to the left, for more focused tone adjustment from the tone knobs. Switched to the right, this broadens the effect of those controls, which can be especially effective at lower volumes.

11. Ducking – This is a digital delay. The mix level automatically responds to your playing volume, reducing the level of the delay while you are playing, and increasing the level when you stop.

12. Analog – This is a model of a classic analog delay pedal, providing a classically warm, personality-rich sound with subtle modulation.

13. Tape – This is a model that provides classic darkening echoes, and the organic variations typical of classic tape.

14. Repeats – This knob sets the feedback, which determines how many repeats of the delay you’ll hear.

15. Tap – Tap two or more times on this button to set the delay time to match the speed/tempo that you tapped. 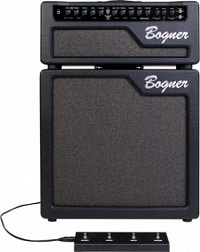 If you’re looking for the classic American amp sound, the Bogner Alchemist line has something for everybody. Whether a head and cabinet is what you’re after or a more portable combo, there’s an Alchemist for you.

Both start with two 6L6’s in a 40 watt Class AB power section. A 20-watt variac mode not only reduces the power but delivers a slightly brown sound. The head and the combo have two channels with independent EQ, volume and gain controls. Channel 1 (labeled Gold) delivers everything from silky clean tones to simmering blues as the gain is turned up. With the Crunch mode engaged, you’re in AC/DC territory. Channel 2 (labeled Mercury) punches out the molten hi-gain tone that made Reinhold Bogner’s amps famous.

Further tone-shaping for single coils or humbuckers is an additional feature on both channels. The Gold has variable Bright and Deep switches, while the Mercury offers Bright and Mid Shift. No matter what guitar you use, its natural tonal characteristics can be reproduced accurately.

The parallel effects loop in the Alchemist line has an adjustable level. Reverb and Delay are on tap in their own circuit and available in a couple of different flavors. Choose from Plate/Spring/Hall for Reverbs and Ducking/Analog/Tape for Delays. Each has its own independent level control. There are just enough options to give life and depth to your sound, without offending the purists. A four-button footswitch allows the Effects to be engaged, as well as a Boost and the ability to select channels. The Boost has just enough volume and grit to put solos over the top.

The retro-looking Alchemist cabinets are all open-backed and use Celestion speakers. The 1×12 combo comes with a Vintage 30, while the 2×12 combo has a diagonally-mounted G12M Greenback and a G12H Anniversary speaker. The matching 2×12 extension cabinet also uses the Greenback and G12H speaker combination.

To sum up the Bogner Alchemist, from Bogner’s official website:

If a lot of punch and versatility is what you’re after, Alchemist has it in several no-nonsense packages. The Bogner Alchemist combo can be had for a very modest price.

OK, I’ve been finding a ton of user reviews for this amp on the net, and it seems that half of you think that the Krank Revolution+ amplifier is dark, crunchy, and ‘not worthy’. This […]