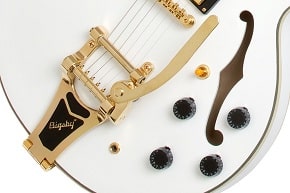 Here’s how fresh the 2011 Epiphone ES-355 is at this point in time and space: I walked into two different music stores, one a giant corporate retailer and the other a small local shop (albeit one that specializes in Epis), and neither one of them even knew it existed much less had one in stock.

The newest version of the ES-355 is the latest in a lineup of surprises this year from Epiphone. There are several distinct features that separate the most recent model from other ES-series hollowbody electrics. The elegance of the classic shape remains, with the familiar double F-hole cutouts, but it almost seems as though the company is making this guitar for a certain type of musician. With previous signature models by musicians ranging from Alex Lifeson to B.B. King, Epiphone certainly has experience at tailoring their guitars.

The most obvious difference is the presence of the Bigsby tremolo bridge. Not everyone prefers a Bigsby, something that couldn’t possibly have been lost on the manufacturers. The same can be said of the gold hardware (including full-size humbucker pickups patterned after those produced in the late ‘50s), the cream triple-ply binding and the massive Pearloid block inlays pooled within the night-shady ebony fretboard and set atop the headstock like an Oriental puzzle (I don’t think that’s an unfair description, actually).

Whether that’s your thing or not, those aesthetics are without a doubt eye-catching, sure to drum up a considerable conversation in any room. The ornate design shows well whether it is against white, black or cherry finish. While it may not be everyman’s guitar, there’s no doubt that the new ES-355 is a six-string statement whose looks and performance are equally impressive – and, as with so many other Epiphone offerings, it is sure to be fertile ground for those of you who must modify (you know who you are).

That fact is due, as much as anything else, to the price tag. At around $700, it is indeed an affordable guitar – the same cannot be said of Gibson ES-355s, or of past models including the Riviera, Casino and DOT. It is even different enough from its own Epiphone cousin, the Sheraton, that most hollowbody mavens may have to summon quite a bit of will power in order not to succumb to their chronic GAS (Gear Acquisition Syndrome) pains – especially those who are unable or unwilling to shell out the big bucks for a new or vintage Gibson.

The best thing about this Epi (or any of the aforementioned related hollowbody guitars) is its sonic versatility. It can carry just about any tune from blues to country to that old-time rock ‘n roll. It probably won’t suit the needs – or the style – of the hair-metal balladeer in a live setting, but that doesn’t mean that a musician who favors hard-bodies wouldn’t want to get his or her hooks on one of these beauties as well.

There’s much to love about the new Epiphone ES-355, yet another home run by a company whose batting average has been running pretty high as of late. The sooner they find their way to the shelves and showrooms, the better off the music world will be.