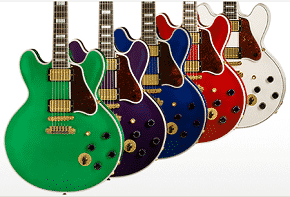 Gibson Guitars — “Lucille” has been a legend ever since the King of the Blues christened his guitar with the name after saving it from a dance hall fire in Twist, Arkansas, in 1949.

Also a legendary Artist Model in the Gibson catalog since its introduction to the lineup in 1980, Lucille has only ever been produced in Ebony or Cherry finish—until now. Just in time for Christmas 2010, Gibson Custom introduces an extremely Limited Edition of Gem Series B.B. King Lucille guitars, available exclusively from Musician’s Friend. (Update: Sold out!)

Based on the exalted specs of Gibson Custom’s B.B. King Lucille model, the Gem Series includes five exclusive new finishes, produced in only 25 guitars of each color: Sapphire, Amethyst, Diamond, Ruby, and Emerald. At a list price of $5,175 all are instant collector’s items, and are sure to go fast. In addition to these rare and exclusive finishes, all Gem Series B.B. King Lucille guitars have all the outstanding features and unparalleled Gibson Custom workmanship that makes them outstanding players as well as prize pieces for your display case.

Like the ES-355 that B.B. King took up as his partner in the blues some five decades ago, these guitars are made to Gibson’s classic double-cutaway semi-hollow design, but without the f-holes of traditional models, a modification originally made at the request of King himself to help cut unwanted feedback. A pair of genuine alnico-magnet humbucking pickups translates every playing nuance through the deluxe tone switching and stereo output capability on this model (also mono capable), while a modified hardware set completes the high-performance package. An ebony fingerboard with large mother-of-pearl block inlays, gold-plated hardware, and the custom mother-of-pearl “B.B. King” and crown headstock inlays further declare the regal origins of this guitar.

Each Gem Series B.B. King Lucille comes complete with a Gibson Custom hardshell case, a special color-matched Certificate of Authenticity, a The Best of B.B. King Christmas Collection CD, and The B.B. King Treasures: Photos, Mementos & Music from B.B. King’s Collection, a 160-page hardcover book. But if you want one, you better reserve yours now at www.musiciansfriend.com/gemseries, before the limited run of 125 guitars total is sold out — (Update: Sold out!)

Hair of the Dog by Nazareth is an ideal song for those of you who are either classic rock lovers, or just starting to play guitar, because not only is this song a timeless […]