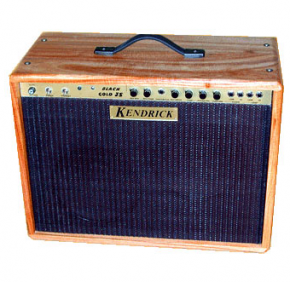 The Black Gold 35 is Kendrick’s attempt at bringing boutique amp quality and tone down to sane budget levels. With it’s all-tube circuitry, which includes a pair of 6L6’s pushing a duet of Kendrick 10″ Black Frame speakers, tube-driven reverb with mixing, tone, and drive controls, and tube rectifier, it features one taboo feature for fancy-amp snobs: a printed circuit board.

Gerald Weber, the president (or according to their website ‘El Presidente’) of Kendrick, admits that he used to be one of these ‘amp snobs’, but points out that the use of a printed board was simply a way to keep costs down.

The Kendrick has dedicated tone and volume knobs for both the clean and lead channels, but like the Top Hat you will have to run an A/B switch to have access to both channels without having to switch plugs around mid-song. According to Weber, the lack of features is deliberate.

“The more tubes and the less circuitry you have, the less you degrade the tone.”

There is, however, one single feature that is very sweet indeed: Kendrick’s rear-panel Quick Bias System, which allows you to change the bias of your tubes (or match new tubes) with a simple voltmeter. The Quick Bias System is safe, and does not require you to tempt fate by fooling around inside the amp.

In testing, a Jazzmaster was played through the clean channel of the Kendrick, with the volume around the halfway mark. The Black Gold produced an aggressive yet glassy Fender Blackface type of overdriven tone, and killer surf tones as well. The amp seems to excel in the surf arena, thanks to it’s plentiful reverb controls, which allow the reverb to be tweaked to perfection for attaining the sounds of Dick Dale and the Ventures.

Guitars with humbuckers were able to create a ZZ Top-style tone by cranking the clean channel up and playing hard. Billy Gibbons would be proud. However, the Black Gold’s lead circuit is considerably less versatile than its clean channel…unless you are going for a grungy Neil Young tone, which the Black Gold can do quite well. Another great amp to check out is the Kendrick 2210 Combo Amplifier.

Jet City Amplification is proud to introduce its new JCA100HDM 100 watt tube guitar amplifier. The JCA100HDM flagship is based on the popular JCA100H – two channels of Soldano tone and 100 watts of pure […]

Laney amps, like their British brethren Orange and Marshall, have been around since the dawn of time, at least in rock and roll terms, and have helped to shape the sound of rock music and […]