Not only is the Kendrick 2210 the best-sounding, best-looking and best-built Fender-style amp I’ve run across it also encapsulates two prevailing trends in musical equipment: a craving for the lost quality attributed to anything “vintage”, and an appreciation for small production-run, handmade gear.

Kendrick is a “boutique” company based in Pflugerville, Texas, that’s building dream amps from primo materials… and if the right parts aren’t available (like super-efficient output transformers and black-frame Jenson-style speakers), they just tool-up and make’em themselves. One glance tells you this beautiful amp is a labor of love—the antique tweed covering gives off a golden glow, the light brown grille cloth is pure Fifties, the steel-reinforced leather handle is hand-stitched and the triple-plated chrome on the control panel looks an inch thick. Inside its solid pine, dovetail-jointed cabinet, you’ll find hand-soldered, cloth-covered wire, a 16-gauge steel chassis and sweet-sounding Sovtek tubes nestled in ceramic sockets. Workmanship, of course, is superb. 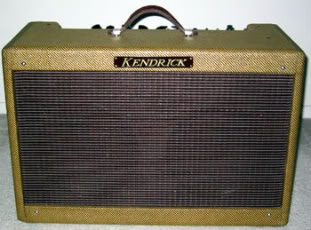 The electronics are based on the famous 40-watt, Western Electric/Fender ’59 Bassman circuit and are housed in a Fender “Super” –sized, 2×10 open-back cabinet. The tube configuration represents a precise balance of power and tone: twin 5881 power tubes (military version 6L6’s) a trio of 7025’s, a tube rectifier (GZ34) and a single 12AY7, which has less gain but draws more current than 12AX7’s, producing a richer, “tube-y-er” sound. Rather than trying to meet every guitarist’s needs all at once, the 2210 concentrates on getting just one thing right: a classic, tweed Era sound. There are contemporary embellishments—the caps and resistors have lower tolerance values than those originally used by Fender and thus will last longer, there’s spike protection and transient power suppression to prolong tube life, a hum-reducing circuit, and a few other modern mods—but nothing violates this Prime Directive.

Sharp-eyed technoids will have spotted something very un-Bassman-like in the tube list: an extra 7025. Discretely parked underneath the main amp chassis is a mini-chassis with an effects loop send and return, loop return gain/third gain stage control and slide selector switch, plus footswitch and preamp out jacks. Toggling the switch (or the supplied footswitch) assigns this extra tube to either the loop’s return circuit or adds a third gain stage for mega-distortion.

But even great speakers and choice amp circuitry will produce a sucky sound if linked together with an anemic output transformer. Once again, Kendrick found existing components unacceptable, so they hand-wind theirs one at a time. The 2210’s transformer is the key to its awesome sound. The 2210 is fat, fat, fat…a total surprise since amps this small are expected to sound thin.

Another transformer-related benefit comes from only having two 8-ohm speakers rather than the traditional, 2-ohm, 4×10 Bassman configuration—thus the amp can work the speakers twice as hard. Credit goes to New Wave guitar god Tom Verlaine (of Television) who first asked Kendrick to make him a 2×10, since he was doing a lot shuttling between recording sessions in New York City and needed a taxicab-friendly amp. The Kendrick 2210 was road-tested and surpassed all expectations.

Jet City Amplification was formed in September 2009 with the goal of delivering guitar products to players seeking high-quality amplification products without the big price tags typically attached to boutique offerings. These days, a lot […]

As many of you already know, Gear-Vault was first on scene to report the original notion: “Gibson to create Strats for Jimi Hendrix’s new Signature Model?” Less than a week later Gibson finally confirmed what […]