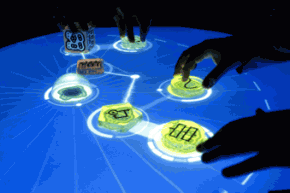 What if you could make music simply by moving plastic blocks around on a glowing table top? Well, you can with the Reactable, a cutting-edge instrument that combines computer technology with a hands-on interface. Forget the tedium of clicking away with a mouse and altering config values in some outmoded digital production program: With the Reactable, all it takes to alter a sound is with a spin of a plastic block. Want a new sound? Add another block. Want to add a filter to that sound? Add a square piece. Need to add some Swiss beats? Add the 13-sided tempo piece. While the capabilities of the instrument are still being understood, it seems to be free of boundaries.

Originally designed as a musical research tool, the Reactable has come a long way since the first prototype was developed in 2003 by a research team at Pompeu Fabra University in Barcelona. Since its inception, it has awed audiences around the globe and picked up a handful of awards in the process, including Hot New Instrument of the Year by Rolling Stone Magazine. Sometime later, when the eccentric Bjork incorporated the sci-fi instrument into her line-up for her “Volta” tour, it received even more exposure in the music industry. Three years ago, there were only three in the world. Now anyone can place an order for the streamlined Reactable Live setup.

So how does it all work? Well, an infrared camera sits beneath a translucent acrylic table top, and it sends positioning data to a laptop. The computer then generates images that are projected onto the bottom of the table, which can be seen through the top. Also, there is a mirror involved and infrared lights which illuminate the surface. However, there is a very exact science when it comes to the camera and the projector: if they aren’t aligned and calibrated perfectly, the entire setup is out of whack. Next, various plastic shapes–cubes, squares, rounded squares, circles, pentagons, and nonogons–are set on the surface of the translucent table. Each shape has a specific function. Some are loops, some are beats, some are filters, and some are harmonic variables. Depending upon the configuration of the shapes, which changes as the musician moves the pieces, the songs various elements and textures morph. Even random placing of the shapes will output some kind of congruent sound. It’s all about discovery on-the-fly.

Sergi Jorda, Marcus Alonso, Gunter Geiger, and Martin Kaltbrunner are the geniuses behind the Reactable. People have been using computers to make music for some time now, but, as Sergi explains in his interview with Kirsten Dirksen for Currents TV, he and his co-creators wanted to come up with something that helped people visualize the process. And the Reactable is just that, an awesome warp-zone collection of lights, flashing cubes, and overall space-age appeal–an instrument that would make any club in the world infinitely cooler. But, as Sergi points out, “nothing that you see is a decoration.” Each light shape that surrounds each piece controls something, whether it’s volume, amplitude, wave shape, pitch, dry/wet levels, or tempo. Also, the Reactable was designed with multiple users in mind, which is something that sets it apart from most instruments. How many musicians can it accommodate, exactly? Well, as many as fit around the table. As Sergi says, “We believe in making creativity more democratic.”

The only slight issue with the Reactable is its current price. At roughly 13,000 American dollars, the Reactable Live setup is a pipe-dream for most. But history has shown us that time tends to lower the cost of technology, and maybe in five years Reactables will be more affordable. For those who can’t wait that long, though, there is another option. If you own an Apple iPad, you can download the Reactable Mobile App from the Apple store for about $10-20. It recreates the surface of the table on you iPad quite effectively, and instead of grabbing the plastic pieces with your hands, you simply touch graphical representations of them with your finger and move them around the screen. Since you can record and upload your own sounds to the app, you have a potentially infinite world of sound at your fingertips. The app is also available for the iPhone and the iTouch, although the tiny screens on these devices limit the usability of the Reactable app.

I think that the true beauty of the Reactable for guitarists, however, is its potential to be a very capable loop station. You could record any number of guitar segments, input them into the Reactable, and begin mixing, melding, and concocting completely unique pieces of music. So if you could somehow rig the Reactable with a record pedal, like any standard loop station, you could really make whole universes of music open up.