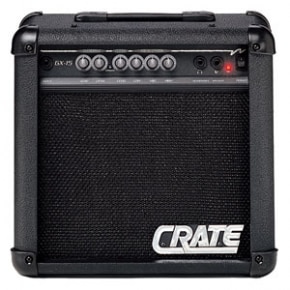 I have a Crate GX15X, which has a gain channel and a lead channel with a built-in graphics EQ. I wasn’t pleased with the amp’s distortion, so I bought a Danelectro Fab Tone fuzz pedal. Now I can get decent distortion when practicing on my own, but I can’t get a suitable tone when I crank up with my band. Any answers?

Gain, or distortion—whichever you prefer to call it—can be tricky. Over the years I’ve learned that increasing the level of distortion in a signal reduces the definition and punch of the source tone. This is especially true with amps that have a rather limited power rating, like your Crate GX15, which pumps out a meager 12-watts RMS. And although distortion usually sounds quite pleasing on its own, a highly overdriven tone can get lost within a full band.

To understand how large amounts of distortion can obliterate your signal’s carrying power, consider how distortion changes the shape of your guitar’s clean signal. Viewed through an oscilloscope, a clean tone appears as a well-defined wave moving up and down, smoothly and evenly. As distortion is introduced in the signal, the wave becomes jagged and shredded, losing its definition along with its steady oscillation. That’s the tradeoff you make when using a fuzz box or other distortion device.

However, you like distortion, so how can you have your gain and hear it too? For starters, if you aren’t willing to settle for less distortion, you should get a more powerful amplifier; or if your current amp has an extension speaker jack, you could try adding an external cabinet to increase the dispersion of sound from your amp. On the other hand, you might simply back down your gain to a level that suits your taste while allowing you to be heard in your band. Take your pick.

With a name that sounds like something out of Pulp Fiction, Top Hat’s update on Vox’s AC30, the King Royale is anything but cheesy. The Royale is a 35-watt amp that is flawlessly built, has […]