Don’t believe the hype. After the barre chord, the most important thing I learned as a guitarist was to take any and all advertisements that promise “monster tone at affordable prices” and budget-friendly, triple-digit-decibel orgasm” with a grain of salt. After all, what are manufacturers suppose to say? “Our product sounds cheesy and tinny, but what do you expect for $500?” I think not.

So it was with pronounced skepticism that I accepted the mission of review two Fender amplifiers: the SFX Satellite and the Acoustasonic SFX II. These units feature the company’s patent-pending Stereo Field eXpansion (SFX) technology, which projects a 300-degree stereo image around the sound source. The hype—as it had been reported to me before I tested the product—was that this wide sound dispersion creates a sort of six-string “surround sound,” and does away with many of the problems that plague other stereo guitar setups. Conventional stereo combos sound great if you have the luxury of standing directly centered between the two speakers; otherwise, much of their effect is lost. Rigs in which two amps are run in tandem, presumably on opposite sides of the stage, provide a luscious stereo spread for the audience and band members located at equal distances from the two sound sources, but the effect is greatly reduced for listeners located near one of the sources.

Could Fender really have found the stereo solution? Whether they had or not, the unorthodox design and technology that makes the SFX amps do the thing they do were certainly intriguing. Licensed from Groove Tubes founder Aspen Pittman and renowned acoustic engineer Drew Daniels, SFX technology (originally called Center Point Stereo) draws its inspiration from an orchestra mic’ing technique called midside miking, which, thanks to its unique phasing characteristics, creates rich ambiance. SFX produces its spatial effect by taking a mono signal and running it through stereo effects specifically voiced for the guitar. (The on-board digital signal processing [DSP] effects on the SFX amps are the first products brought to the market by Fender’s year-old signal-processing division.) The left and right signals from the stereo effects output are then fed to a Pittman-Daniels-designed SFX matrix, which creates a left-plus-right signal (the sum of the stereo signals) and a left-minus-right signal (the difference of stereo signals). The left-plus-right signal gets returned to a speaker in the conventional forward-facing position (in the case of the Acoustasonic, this would be the top speaker); the left-minus-right signal is routed to a second speaker mounted below the top speaker at a 90-degree angle (that’s “sideways,” to us guitarists). The bottom cabinet is open on all four sides, allowing sound to emanate from both sides of the speaker in a phase-reversed scenario. Because the left-minus-right and left-plus-right signals are totally distinct from each other, the setup produces none of the bothersome phase cancellation that often results from multi-speaker (and multi-amp) setups, and the signal is allowed a wide dispersion.

So there’s the math. However, if you skipped the last paragraph, don’t worry, because this is when we get to the moment of truth. Does all this weird science pay off? 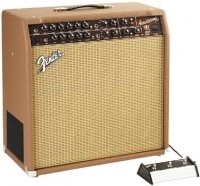 Channel one features again, treble, mid, bass string dynamics (an extremely nifty feature that rolls off grating high-end frequencies at loud volumes), phase reverse and a feed-back notch control, as well as a DSP, send that regulates how much of the guitar’s dry signal is sent to the amplifier’s onboard effects. Channel two is much the same, except that it adds a balanced (XLR) mic input and forgoes the string dynamics control. Both channels have to insert points for additional effects so that you can run your favorite compressor or signal processor in tandem with the onboard DSP.

The Acoustiasonic’s master controls include an SFX mix control, which allows you to regulate the amount of “spaciness” you give your sound, and SFX bypass switch, a DSP return control, an output phase switch to further squash feedback problems and a rotary selector to dial in the DSP effects. The effects include seven reverbs (two-room, two plate, and three hall), five types of chorus, four flavors of flanging, slap-back echo, three delays, six reverb/chorus combinations and six permutations of reverb/delay. None of the effects parameters are user-tweakable.

Using a Guild F5 equipped with a Fishman piezo pickup, I plugged into channel one and set out to determine how the Acoustasonic sounded with no effects at all. While the amp doesn’t break any new ground in the acoustic amplification department, the EQ is extremely well-voiced, and it’s a cinch to dial in the perfect blend of low-end thunk and high-end shimmer. With the help of the feedback and phase controls, I was able to apply a healthy amount of preamp gain and turn the master volume wide open without being plagued with feedback. At higher volumes, the string dynamics control was effective at shaving off any high-end shrillness produced by the piezo pickup.

Having determined that even without on-board signal processing and SFX this amp could hold its own against the competition, I began scrolling through the built-in effects. The reverbs are spacious and the choruses are lush, while the delay and reverb settings are rainforest-like in their density. And while I salute Fender for displaying excellent ears in the writing of their effects programs, it would be nice if they had allowed the user to fine-tune the number of delay repeats and depth and speed of the chorus and flanging effects.

Now that I had been a responsible reviewer and put the amp through its paces, it was time to kick the SFX—the secret weapon, shall we say—and whether I was floored by the tone or left standing and sneering. I was floored. Turning on the SFX is just about as trippy and wild as having a serious hit of blotter acid kick in (not that I would know anything about that). Suddenly you’re swimming in the sound of your guitar: It’s dancing behind your head, lapping at you from every corner of the room, floating right above the floor, and all without appearing to be any louder than it was before. Best of all, unlike other stereo amps, the Acoustasonic’s stereo imaging can be heard and felt from virtually anywhere in the room, even when the amp is set at moderate volume levels. Wow, I thought to myself: If I were playing a coffeehouse gig with this thing, they’d hear it in every nook and cranny of the room without me having to blow the foam off every cappuccino within a square mile. With a mic plugged into channel two, the Acoustasonic turned into an all-in-one super-portable PA system. And let me tell you what, a little SFX can make even the most marginal voice go a long way. [Scroll down to read about the Fender Satellite SFX] 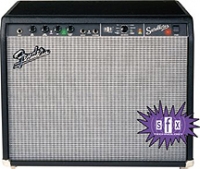 The Satellite, unlike the Acoustasonic, is not a stand-alone unit but works in conjunction with your typical amplifier. To prove that it can work wonders with even the most modest of amps, Fender sent along with a very moderately priced, solid state 60-watt Fender Deluxe 112 combo to use as the Satellite’s companion amp. Having placed the Deluxe 112 on top of the Satellite (the top of which is carpeted for just this sort of application), I connected the Deluxe’s preamp output to the input of the Satellite; the Satellite’s output is then patched back into the Deluxe’s preamp-in jack. (Alternately, you can connect the Satellite using your amp’s effects loop.) Thus, the speaker in the Deluxe serves the same purpose as the built-in forward-facing speaker in the Acoustasonic.

While the Deluxe provided a perfectly serviceable tone of its own, kicking in the SFX with an electric guitar produced an even more pronounced effect than with an acoustic. Go listen to Eric Johnson’s “Cliffs of Dover” with headphones, and you might get a small taste of what lies in store for you. With the clean settings, the lush reverbs and choruses have that $10,000 rack-of-gear sound, and high-gain soloing is an equal pleasure. Between the digital effects (which have to be engaged at all times for the spatial circuit to work) and the SFX, the Satellite is an extremely forgiving rig, since the wetness of the sound does wonders for covering up minor playing imperfections. If the SFX is too wet for your rhythm parts but you want a huge lead sound (or vice versa), you can connect a footswitch to the front panel mounted SFX bypass control and kick in the magic only when you feel it to be appropriate. While the DSP section of the Satellite is similar to the Acoustasonic’s, it has one additional effect—Fender’s trademarked “Vibratone,” which generates a pulsating, undulating vibrato/rotary speaker effect guaranteed to tickle your short hairs. If you have stompbox effects that you can’t do without, the SFX technology will only6 make them sound bigger and richer: Through the Satellite/Deluxe 112 setup, my old MXR gained startling new dimension and depth.

While both the Satellite and the Acoustasonic certainly excel at creating awe-inspiring stereo sounds, they do have one serious limitation: Because most club Pas aren’t stereo and certainly aren’t wired for Surround Sound, the SFX effect cannot be effective miked, rendering it somewhat inconsequential in big venues, where the sound in the front of the house is generated primarily by the PA. Yet, even in these situations, the SFX amps can provide guitarist (and particularly the guitarist who doesn’t have his own monitor mix) with an exciting on-stage sound that will not only keep him stoked but keep him audible to his band members everywhere on stage, even when the amp is at a soundman-friendly (read: “nearly inaudible”) volume.

It’s good to be wrong once in a while. For once—just this once—you can believe the hype. Fender’s SFX technology amps are the ultimate toys for players who thrive on lush, wet sounds. If Keith Richards is your main man, the heavily effected tones may drive you retching into exile. But for ear-candy fans, these units are a must-try. Whether you’re playing in your bedroom, strumming at the Latte Lounge or rocking at your local club, these sounds will take you and your audience to new, strange and extremely pleasant places. Wasn’t there a Warrant song on Cherry Pie called “Love in Stereo”? Maybe Fender could use it for their marketing campaign. Then again, maybe not.

Field Guide to Guitar Amplifier Tubes – Everything You Need To Know

What is a vacuum tube? — If the link between a light bulb and a raging Marshall stack doesn’t seem obvious, take a glance at those vacuum tubes glowing inside your amp. And then pay […]