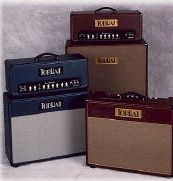 With a name that sounds like something out of Pulp Fiction, Top Hat’s update on Vox’s AC30, the King Royale is anything but cheesy. The Royale is a 35-watt amp that is flawlessly built, has a very nice salt-and-pepper grille, and comes in a variety of colors (all made with thick Tolex, for protection), and offers several modifications to the AC30 design. 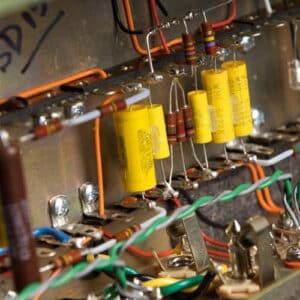 The King Royale is a stripped-down non-switchable two-channel amp without the vibrato/tremolo features of the original AC30. Both channels can be used, but not without running an A/B switch box in your effects chain. The first channel keeps it simple, with only two controls, one for volume and another for tone, and sounds like a combination of the Vox’s brilliant and normal channels. Channel two includes the volume and tone controls, but adds bass, cut, and midrange controls, along with a master volume. Adding the midrange control to the amp makes it much more versatile than your run-of-the-mill AC30, giving you far more control of the amp’s tone. The master volume control (which falls directly after the preamp circuit) is excellent for helping you achieve overdriven sounds at lower volumes (which will make your landlord more likely to tolerate you). As for speakers, the King Royale uses one Jennings Blue Bulldog speaker and one 35-watt Celestion Greenback for a nice, smooth tone, rather than the Vox technique of running two Bulldogs.

The King Royale was tested with a series of P90 and humbucker-equipped guitars (and even a Jazzmaster thrown in for good measure). The result? Beautifully rich, harmonic tone that can only be produced by EL84 tubes in a Class A amplifier. Armed with the King Royale and a Gibson Les Paul, it takes less than five minutes to dial up Brian May’s ‘Killer Queen’ sound…no kidding. 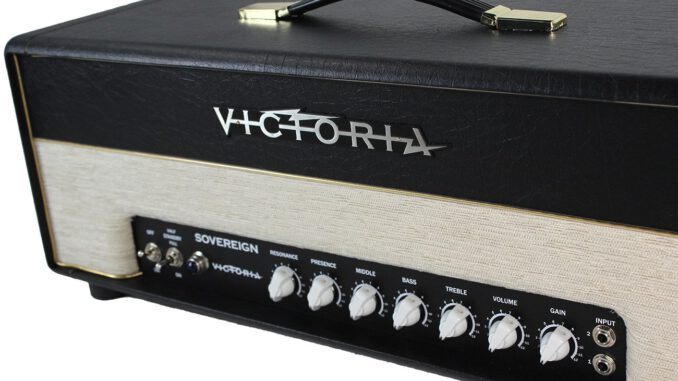 The Victoria 50212-T is very similar to the Fender Twin built between 1955 and 1957 (of the low power variety). This meat-and-potatoes amp relies on hand-wired circuitry that drives 45 watts (via 6L6 tubes) through a pair of Mojo Tone V-30 ceramic magnet speakers, as well as a blatant just-say-no attitude toward built-in effects to drive home its point. Each channel has its own dedicated volume control (bright and normal), as well as controls for presence, bass, and treble. The amp also has two input jacks. The Victoria, unlike the Twins, utilizes a single GZ34 tube, rather than the dual 5U4 rectifier tubes, allowing for more reliable performance. 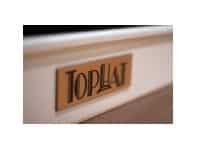 Thanks to it’s modified rectifier circuitry the Victoria supplies enough power to keep power chords sounding clear while maintaining the creamy bass sounds associated with old-school amps. The 50212-T can produce a staggering range of tonality, despite its lack of an obscene amount of control knobs and switches. A Fender Telecaster played through the single-coil neck pickup had a bright pop, while the Fender Strat (using the same pickup) had a fatter, more crystalline tone (using clean settings, with the master volume set between two and three). Kicking the volume up to around 5 had a tendency to produce highly sensitive overdrive that had noticeable variations, depending on which guitar was being used. For example, a Telecaster (using the neck and middle positions) had a tone reminiscent of the Rolling Stones, whereas a Gibson ‘59 Les Paul Junior with a P-90 would churn out a harmonically-rich crunch. When presented with a high-output humbucker, such as a Seymour Duncan JB and turned up to 11, the Victoria generated a zingy, articulate, and thoroughly satisfying lead tone.

Jet City Amplification is proud to introduce its new JCA100HDM 100 watt tube guitar amplifier. The JCA100HDM flagship is based on the popular JCA100H – two channels of Soldano tone and 100 watts of pure […]