I’m retubing my 5150 head entirely. What tubes do you suggest, and what other suggestions can you make for choosing good tubes and getting good sounds

You’ve got some choices here, James. Three come to mind—namely, China, Russia, and in the U.S. These are among the few countries that still produce tubes. Your 5150 uses four 6L6s as its output tubes and five 12AX7s as its preamp tubes. China makes a reasonably priced 6L6. The ones I’ve heard have a sweeter and softer overdrive, say, the Russian 5881, which is a direct replacement for the 6L6 and has a harder, colder character to my ear. Although these tubes are not as well made as some American and British tubes (the production of tubes in both the U.S. and U.K. has dwindled to little or none), the Chinese and Russian tubes should last a reasonable amount of time, unless you’re rehearsing and gigging five nights a week.

If you’ve got lots of cash, I highly recommend buying a new old stock (NOS) tubes.

These are tubes that were manufactured years ago and never sold or used. A set of four NOS RCA 6L6 “backplates” will run you over $300, while the GE 6L6s go for about $150 a quartet. These tubes deliver superior quality and construction if you can afford them. If you can’t, don’t worry. You can still get a killer tone out of tubes from China or Russia.

To replace your 12AX7s, I’d recommend the Chinese-made tubes. I’ve heard a 5150 with some really expensive British military spec 12AX7s (the higher military specifications typically give you higher performance), and I actually preferred the Chinese.

When you take your amp for retubing, ask the technician to clean the tube sockets and to check that all the sockets hold the tubes firmly. It’s in the socket that the tubes connect to the amp, which is why it’s imperative that you provide the cleanest, most stable connection for the highest performance. Happy motoring. 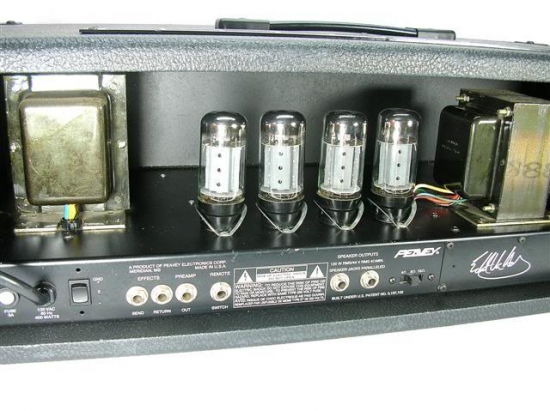 I have a Peavey 5150 half stack…My Lead Gain is usually set on 6 and I use the High Gain input. When I play a muted E, B or A, a crackling sound occurs that fades with the signal. Also, when turned up to stage volume and striking a muted A, the back of the cabinet vibrates against the inside supporting beam. How do I solve these problems?

Tube amps—Ya love ‘em, ya hate ‘em. The crackling sound you describe sounds like it’s coming from one of three probable sources. The preamp tubes—little glass vacuum bottles with tiny metal bits inside you beat the shit out of playing “Poundcake.” Switch them with our spares. (Repeat after me: “I must carry spare tubes and fuses… I must carry spare tubes and fuses… I must carry spare tubes and fuses…”) If this doesn’t work, it’s off to the warranty center where the amp will be checked for faulty capacitors or a “cold” solder joint. As far as the sound post in your cabinet is concerned, I too am in love with the “Resonance” control in the 5150—lots of bass and no flab. I would most likely run it all the way up, all the time, as you probably are. The only cure for this is to screw the back cabinet to the center post. But attempting to do this yourself may well void your warranty, plus you only get one shot at drilling the hole in the right spot. Seek professional help.

How to rate your amplifier speaker cabinet ? – properly hook it up

Why is it that when manufactures rate their stereo amplifiers at say, 40 watts, the back panel will usually read 20×20? Is that really 40 watts? And if I run two 60-watt mono amps through […]

To get the most out of your tube amp, which can be a hefty investment, here are some easy to follow handling and maintenance tips. There’s no arguing that tube amps still set the standard […]