Down through history, people have constantly been in search of the next big thing. From the car, to the washing machine, the compact disc to the iPod, many things are thrown at the wall, but only certain things stick.

This same principle remains a constant in the field of guitars; the tried and true functional pieces ring true for players of all sorts, and the flashy toys eventually end up in the garbage can with yesterday’s potato chips. And yet, some of these things that really should be utilized to the fullest extent end up being tossed away with everything else, for one reason or another, only to be brought back into popularity many years later on a retro throwback trend.

One of these flash-in-the-pan wonders is the Gibson 335-S. Derived from the almighty Gibson ES-335, the 335-S had the sonic might to run with the best of the best in its day.

The original Gibson 335-S was designed in 1980, to make the ES style more appealing to a larger market. The biggest difference being that it is substantially smaller than a standard ES-335, it also is a complete solid maple body and neck, no hollowbody cavities to speak of. A very classic and traditional axe, the 335-S is equipped with a Burstbucker 2 and 1, on the bridge and neck positions, respectively.

The previously mentioned maple neck is set style, which is adorned with a Granadillo fretboard. It’s 22 medium jumbo frets and rounded profile are built to accommodate every day jazz, rock, and blues players. 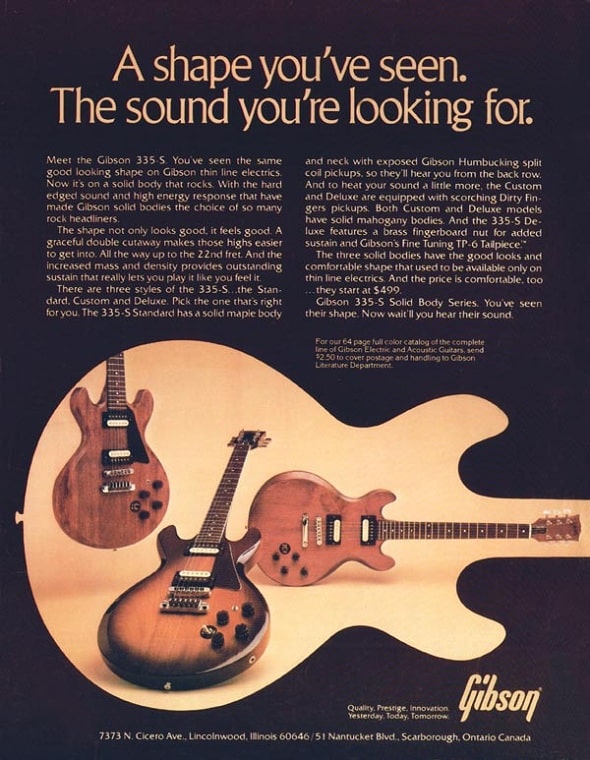 Everyone knows black is the color of choice for rockers, but what could be more extreme, more stylish, and even cooler than black? Only black matte, of course! Capitalizing on the success and acclaim for […]