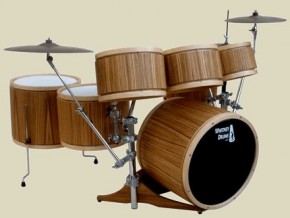 If you’re of a certain age you remember a time when single headed tom-toms were in fashion and whether or not you want to admit it, you’re probably guilty of stacking the smaller toms inside the bigger ones at one time or another. It’s OK, we’ve all done it. The fact is, stacking the drums inside one another just kinda, well…made sense. They took up less space and were easier to carry too. But tastes change and thankfully for anyone with ears, double-sided toms (and bass drums for that matter) came back into style. It seemed that our nasty habit of transporting our drums inside one another and scuffing them all up had been kicked. Welcome to your new jones…

The first time I came across any info on Whitney Drums I was doing some research on Cocktail-style drums. I was impressed with the clean look of Whitney’s tubs especially their seemingly lug-less design and the look of all that natural, un-obscured wood. The lugs are actually integrated into the drum shell itself – or maybe the shell is integrated into the lug? Hmmm…I digress. Some of you arm-chair drum historians may recognize this design from early Duplex drums made around the early 1920s. But dear friends look a little closer and you’ll fine one of the most innovative clever and much needed designs to come down the pike in a long time.

Whitney Drums Nesting Penguin drums are hatched below the lugs–penguins…hatched… Har-har-har! The bottoms come off! Huh? You see right below the “lug” portion of the shell, the upper resonant chamber of the drum is connected to the lower head assembly by for wing screws; Undo the screws and the whole lower portion of the drum separates – with the head still attached! WAAAY cool! This stash-away system lets you stack the smaller drums cozily inside the larger ones, and since there really aren’t and “lugs” on the outside of the shells, the inside of the larger drums don’t get all snarffed up on the inside. Ahh…somebody’s been thinking over at.

But it gets even better. They whole kit-and-kaboodle mounts to its own mini-stage/rug-rack that Whitney calls the Quickstand. Two vertical uprights mount to a collapsible platform, which cradles the bass drum and all your left with is a kick pedal, hat stand and a throne! I’m mean C’mon, the whole thing – 10”x6.5” and 13”x8” toms, 13”x5” snare and 16”x15” bass drum – packs up into TWO bags for easy transport. One for the drums and the other for the Quickstand! The drums sound nice and fat, tune easily and display a high level of craftsmanship – traits you’d expect from a drum made by someone with who’s worked for three decades as a woodworker and sound engineer!

This really may just be the next wave in a space friendly, easily mobile performance rig, easily at home with any drummer playing in space too tight for their regular kit, touring bands with limited space in the van, or even the eco conscious drummer who prefers to take the bus to the gig. Thank you Whitney Drums!
Visit: www.whitneydrums.com

Our Quickstand mounting system offers unparalleled convenience and flexibility. Never fear that postage-stamp sized stage — up to six drums and up to four cymbals mount on one sturdy stand. Break it down, pack it up and you’ll be chatting up the fans before the guitar player can even lug his Twin off stage.”

You may be familiar with Pork Pie drums. In the late 1980’s and early 1990’s the custom drum builder was born as a direct reaction to drums that seemed to be snapped together on massive […]

Far too often I’m told buy a band leader or record producer, to play something “kinda funky”. Funky is, of course, defined in many different ways depending on who you talk to. If you’re talking […]

Famous Drum Sets No.2 As the “Trap Set” began to find its way into the pop music of the early 1900’s, it took on may shapes and configurations. Some drummers approached this new instrument as […]