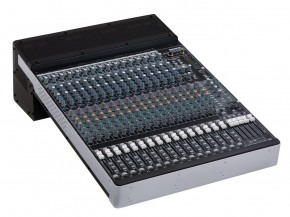 Mackie is widely known for designing high-performance, professional audio gear that fits into the budget of the working musician. They know mixers and continually create innovative new products that blur the line between professional studio applications and the world of live sound. So when I got a chance to test drive the new Onyx-i FireWire Production Mixers, I had high expectations, especially considering the buzz surrounding Onyx-i’s breakthrough Pro Tools compatibility…

AT THE GIG
My friend’s band had a gig the night I picked up the Onyx 1640i, so it the perfect opportunity to see what this new mixer could handle. The 1640i (the largest of the four Onyx-i models) has 16-channels, each with its own Onyx mic preamp and an impressive dual-sweep 4-band EQ.

All six aux sends are pre/post assignable, which is great when running both monitors and effects loops. There’s plenty of useful routing to the subgroups and through the control room section, which also has built-in talkback functionality to bark orders at the band. The analog mixing tools were really satisfying and more than enough to get the job done well.

My “wow” moment came after sound check. I brought along my laptop, so I decided to connect the 1640i via FireWire to record the mix. After a simple setup process, I was all setup to record. Since the 1640i offers 16×16 FireWire I/O, I was able to multi-track record the entire show completely independent from my house mix. I could tweak the EQ to fit the room and ride the faders without risking my recording. I walked away with a studio-quality multi-track recording that I could take back to the home studio and mix down.

What a great concept for bands who want to create easy, but professional, recordings for demos or live albums. I’m also psyched to try out the 1640i with Waves’ new MultiRack plug-in platform, so I can use my favorite plug-ins in live environment and leave my heavy processing rig at home.

BACK TO THE STUDIO
The next day, I hooked the 1640i into my existing home studio setup. I used Pro Tools, so I was really excited to try out Onyx-i’s groundbreaking direct interface with Pro Tools M-Powered 8. I just went to Mackie’s site and downloaded the driver upgrade necessary to make this happen ($49.99 USD). The setup was super simple and I was completely hooked into PT within minutes. I took the live tracks from previous night and started on a rough mix. The Onyx 1640i took what is normally a pain (navigating through a digital “mixer” screen) and turned in into something beautiful.

Since the 1640i has a 16×16 FW interface, you can bring back up to 16 channels back into the mixer’s channel strips. So there I am, using an ANALOG mixer, complete with faders and EQ, to setup my DAW mix! This is great for anyone raised in the analog age and would likely cause digital-era engineers to re-consider an analog mixing solution. I could tell right away that we needed to overdub some guitar parts, so I called the guitarist over and we started that afternoon. Since every channel can either be set as both a live input or a DAW return, it was really easy to bring back every channel but the guitar, dial in a mix and start overdubbing. Zero latency monitoring like this is cumbersome in the digital realm…just one more reason that a legit analog mixer makes sense in a modern digital studio.

THE FINAL WORD
Mackie has once again pulled off something that other manufactures just can’t seem to get their head around. Yes, it’s about what tools you need and, yes, it’s always about what you can afford. It’s Mackie’s ability to work in not just one, but several innovative features that people want that not only make their mixers relevant, but also to continually move the industry forward. Onyx-i is the perfect example, combining all the benefits of a premium analog mixer with the convenience of a high-resolution multi-channel interface. The fact that it packs in boutique-quality sonic performance with the most flexible FireWire routing available, that it’s the first third-party interface that’s compatible with Pro Tools and that does all this at prices that put anything remotely competitive to shame is just icing on the cake. I think I’m ready for another slice. Do you have any milk?

Often time’s bass players believe their 12-pound 1970s-era Fender basses have superior punch, sustain and tone. However, if you think a bass has to be heavy to sound heavy, then perhaps, Yamaha’s RBX4 A2 bass […]