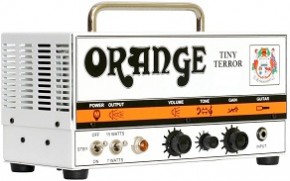 “Lunchbox” guitar amps are all the rage, and why not? They’re portable, can drive just about anything, and are great for recording. Orange was one of the first companies to see the merits of the lunchbox approach, so the Tiny Terror is the result not just of what Orange knows now, but what they’ve learned in the past. Furthermore, it’s a member of a family of products that includes the high-end Tiny Terror Hard-Wired Edition, the two-channel Dual Terror, and two Tiny Terror combo amps with cabinet (versions with 10” and 12” speakers).

The Tiny Terror amp head features an all-tube, Class A signal path (two 12AX7 preamp tubes and two EL84 power amp tubes), with the output switchable between 7 and 15 watts. It’s indeed tiny—a mere 12”W x 5-1/2”H x 5-1/4”D (not including the handle and knobs)—but as the old saying goes, “sometimes good things come in small packages”. The Tiny Terror is even relevant with laptop-based software and sims, as you can use just the effects, then send the output to the Tiny Terror and a cabinet for subsequent amplification.

The amp comes in a padded gig bag, with an external pocket for the line cord, and it just about begs to be carried into sessions. In this context, the 7-watt position is great; put a small cabinet in a vocal booth, and you can get “that sound” at low power while tracking with bass and drums, without having to worry about leakage. For live use, there’s enough wattage for small venues, but obviously for bigger gigs you’ll need to mic it.

The controls set is minimal to the point of being Spartan—on/off switch, wattage switch (7/Standby/15), and three knobs: Volume, Tone, and Gain. Before plugging in, this was kind of off-putting; although I expected good sound—this isn’t my first experience with Orange amps—I figured it wouldn’t be possible to get wide range of tones.

Well, I couldn’t have been more wrong, or more surprised. Orange claims some special two-stage preamp mojo but whatever they’re doing, It works. It’s easy to obtain sounds that range from crunchy blues tones to heavy overdrive, and everything in-between. The Tiny Terror even does convincing clean sounds, as well as clean with a hint of crunch, but keep in mind these requires lower volume levels. If you plan to use these tones live, you’ll definitely want to mic the amp.

As to the tonal character, I’d characterize it as a big, rich sound—not bright like a Twin—with a meaty midrange. Some of the control settings took me back to a more ‘60s kind of sound—think Vox, but darker/warmer—while others were more contemporary, lacking only the “scooped” midrange that’s in fashion for a lot of bands. Of course you can obtain this kind of sound with an effects pedal or with EQ on mixdown when recording.

The other important aspect is that it’s almost impossible to dial in a “bad” sound—at least, I couldn’t find any. This is one of the advantages of a simple control set, as it’s possible to optimize each control to cover an ideal range so that when the three interact, the sound still “works.” I don’t mean to be going on and on about this, but as far as I’m concerned, the sonic flexibility is a huge selling point—if you’re going to be carrying an amp around to sessions, you’ll appreciate that it can give you pretty much any tube amp sound you want.

I expected the Tiny Terror to sound good, but what I didn’t expect was that you could make it sound good in so many different ways, especially given only three controls. This makes it far more valuable in the studio than you might expect from just looking at it. And those who like the software processors in amp sim software but aren’t convinced by the amp simulations should definitely check out the Tiny Terror with a decent 12” cab; it “tube-ifies” the processors’ sound in a way that provides the best of both the analog and digital worlds.

I’d have to say that in a world of lunchbox amps, Tiny Terror occupies a unique niche. It was a total pleasure to review, and I’m sure anyone playing through it would feel the same way.

The SG is one of Gibson’s most iconic models, and many famous players are closely associated with it—including Black Sabbath’s Tony Iommi, Cream-era Eric Clapton, Radiohead’s Thom Yorke, System of a Down’s Daron Malakian, and […]