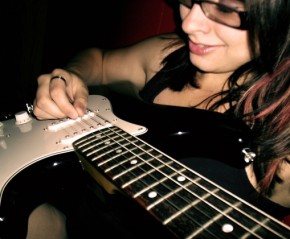 Learning guitar is a common passion among the youngsters.  It is not so tough to learn to play guitar if you follow and practice the lessons properly. Chords are the most important and fundamental thing a learner should focus on. Chords are proper combination of notes which are formed in various patters and after strumming it creates harmonious sound.

If you have started learning guitar you should focus on guitar chords, it is the basic point to start playing popular songs. Even if you have learned limited number of chords you can play wide varieties of songs easily. If you have command on chords you will enjoy learning and playing guitar. With proper knowledge of chords a beginner can start playing some known rock songs in no time.

You can find few chords easy to learn and play but some chords can be difficult for you to play. So when you start learning you should start with easy guitar chords. There are mainly four easy guitar chords you should focus at start, once you have mastered these you can go for more complicated and advanced chords.

First thing you should practice is to control your fingers so that they always get to the right place while playing guitar, and that should be able to apply correct amount of pressure, and it must not touch any adjacent strings accidently. After that you should focus on changing the chords easily while playing guitar. We are going to cover four basic and easy guitar chords here and those are:

These days you have various ways to learn it. You can get a good book or tutorial which will shoe you exactly how you can practice those chords. There are lots of online tutorials and videos available which can help you through the process. The main thing of mastering any chord is regular and consistent practice, practicing twice a week can be a good start for a beginner. Once you know little about these chords you should start practicing it with either a jam track or a metronome.

This is all you need to know about the easy guitar chords, now you have to do only one thing, go ahead and start practicing.

Easy Learn How To Play Smoke on the Water [on Guitar]

Smoke on the Water by Deep Purple has to be the easiest guitar song in the world to learn. This timeless classic rock song is as much fun to play as it is easy to […]