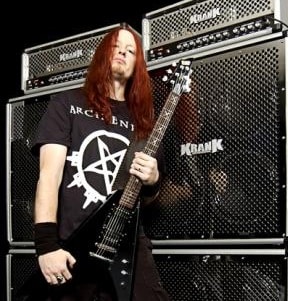 OK, I’ve been finding a ton of user reviews for this amp on the net, and it seems that half of you think that the Krank Revolution+ amplifier is dark, crunchy, and ‘not worthy’.

This is a message to that half: if Dimebag heard you say that, he’d probably kick you in the stomach.

For the other half, rest assured that this amp is 100% pure metal. Don’t let the emo kids tell you otherwise.

Now, let’s get back to what we came here for: information. The Krank Revolution+ (from Krank Amplifiers) is an upgraded version of the first-generation Revolution head. The Plus features better transformers, 6550 tubes (power section), and a serious 120-watts of power, making this amp a thing of beauty. Dark, evil beauty.

The Revolution+ has two channels, ‘Kleen’ and ‘Krank’. The ‘Kleen’ side has a ‘boost’ feature, which helps you get a brighter, more sparkling tone (great for those melodic intros), a 3-band EQ, volume, and an active effects loop.

Of course, the only thing that all of you metalheads want to know about is the ‘Krank’ side, right? How about a 3-band EQ, volume control, a PAIR of footswitchable master level controls, gain, presence and parametric sweep controls. What will all of these knobs do for your sound? My guess is that it will turn your guitar into a lethal weapon…and Dimebag Darrell would have it no other way.

The Revolution+ is built to survive another blitzkrieg. Heavy-duty wood chassis and a metal grille make it solid as a rock. A testimony to the construction would be the 2008 Rocklahoma festival. During the festival, a severe storm broke out causing the side stages to collapse and the lighting trusses to fall on the stacks of Krank amps. After being pummeled by the trusses and enduring three to four inches of rain, the Krank amps were fully functional, and continued to rock through the end of the festival. How’s that for bulletproof?

If you are in the market for a killer guitar amp with amazing metal tone, get a Krank Revolution+. They just rule, And Dimebag won’t have to come back to kick your butt.

Gear-Vault Classifieds is an eBay alternative. Come sell your used guitars and amps with us, for FREE!

There are many amp companies that loom large in the world of hard rock and heavy metal. One of the most important, especially to the more modern kinds of rock is Mesa Boogie. Mesa has a long history of making gain-filled amps, but, to many modern rockers, there is nothing like one of the Mesa Rectifier series. That is why we here at Gear-Vault have made the Rectifiers, or “Rectos”, number three on our list of the Top 5 Metal Amps. […]

Marshalls can be stripped down and simple like a Plexi (reissue or vintage) or featured-out and flexible like the new JVMs, with four channels and 12 modes for ultimate tonal control. The new Vintage Modern heads strike a nice balance between modern features and old-school British tone and will make many rockers quite happy. […]

Metal guitar players ask a lot form their amplifiers. They also buy a lot of them, judging by how many amps seem to be marketed to players of heavier styles. In that spirit, your ever-rocking staff here at Gear-Vault has decided to bring you our choices for the 5 best amps for rock and metal available today. […]