Table of Contents show
1 Where does the electric guitar signal come from?
2 Pickups: Single-Coil vs. Humbucker
3 Connecting Multiple Pickups
4 Pickup Specs
5 Variety is the Spice of Tone

Passive (i.e. battery-free) electric guitar circuits are relatively simple and the possibilities for customization are endless. A basic understanding of pickups, potentiometers, capacitors, and switches is all you need to get creative and take more control of your instrument’s voice on an electronic level.

Where does the electric guitar signal come from?

Pickups are transducers that convert the mechanical energy of a vibrating guitar string into electrical energy by way of electromagnetic induction. It is a fundamental concept studied in physics and electronics that a changing magnetic field will generate a current through a coil of wire. The electric guitar pickup uses permanent magnets and pole pieces to form a steady magnetic field in the vicinity of each individual guitar string. An opposite magnetic polarity is induced in the metallic (steel core) guitar string when mounted above its respective pole piece and when the string moves, the otherwise steady magnetic field changes accordingly. The wire is wrapped around the poles thousands of times to form a coil within the magnetic field to pick up an induced current and voltage. 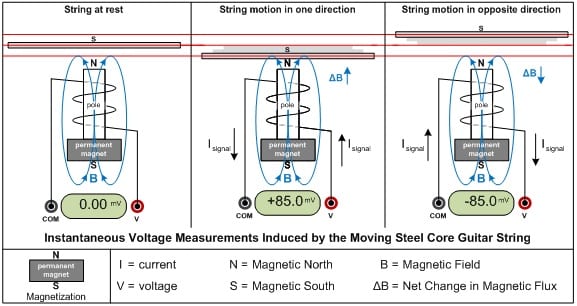 The previous drawing illustrates the electrical and magnetic function of a single-coil pickup. Some pickups might use six permanent magnets in place of the six pole pieces to create the magnetic field, but the idea is the same: create a steady magnetic field around a coil in proximity to the guitar string. The name “single-coil” pickup becomes more significant when compared to the humbucker or “dual-coil” pickup.

The first successful guitar pickup was developed in the early 1930s by Rickenbacker to help amplify Hawaiian lap steel guitars which were popular at the time. The first pickups were single-coils and while they do a good job of picking up the guitar signal they are also susceptible to picking up interference from nearby electrical devices. The Gibson humbucker (US Patent 2896491) was developed in the 1950s to eliminate the “hum noises” resulting from electromagnetic interference. The humbucker uses two coils and a pair of pole pieces (having opposite magnetic polarities of each other) for each string. The coils are wound and connected to each other in such a way that the current produced by the moving guitar string in the two coils adds up (in-phase), while the current produced by electromagnetic interference in the two coils cancels (out-of-phase). Not only does the humbucker drastically reduce noise from interference, but it also has a different characteristic sound. The single-coil pickup is commonly considered to have a thin, clear and bright (more treble) sound, while the humbucker is known to have a full, but dark (less treble) sound with more overall signal output.

When connecting more than one pickup, it’s important to follow the manufacturer’s color codes and wiring diagrams so that the phase relationship is correct. The phase relationship of a pickup is determined by the winding direction of the coil and the polarity of the magnets. The two coils of the traditional humbucker are connected in series with the phase relationship shown in Fig. 1. Most modern Stratocaster style guitars with three single-coil pickups are supplied with a reverse-wound/reverse-polarity middle pickup for a parallel hum-canceling effect when the guitar is switched to a two-pickup position (e.g. neck & middle pickup together) as shown in Fig. 2.

Most replacement electric guitar pickups have limited electrical specifications given on the packaging or on-line which can give you a basic idea of the relative output level and how bright or dark a similar pickup will sound.

Variety is the Spice of Tone

Guitar pickups are a vital component of your tone and replacing them is something that most guitarists can learn to do themselves. Using high-quality pickups can go a long way to bringing new life and excitement to your playing experience. There are hundreds of pickup manufacturers and thousands of pickups to choose from. Whether you’re looking for a hotter pickup, trying to capture a beloved vintage tone or seeking single-coil sound in a noiseless package, brands like DiMarzio, Seymour Duncan, Lace, Porter, Fender, Gibson, and many others offer a solution.

Kurt Prange (BSEE) is the Sales Engineer for Amplified Parts (www.amplifiedparts.com) in Tempe, Arizona, United States. Kurt began playing guitar at the age of nine in Kalamazoo, Michigan. He is a guitar DIY’er and tube amp designer who enjoys helping other musicians along in the endless pursuit of tone.

Floyd Rose is the revolutionary tremolo systems off time. In 1964 a guitarist named Floyd Rose moved from Durango, Colorado to Reno, Nevada. There he started playing in bands. Floyd had many guitar artist influences. […]

Ever had an issue with the input jack on your guitar, bass, or amplifier coming loose? Sometimes, it can be a real pain. Fear no more! The all-new JackTight is here to save the day! […]