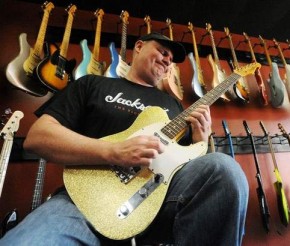 Just as every adult knows that it is inappropriate for one to clean one’s ears at a fancy dinner; every self-respecting guitarist knows there are certain disgusting activities which have for many years been strictly verboten in music stores:

Merely strumming a few chords of those songs—and a handful of other classics from the Sixties and Seventies—will elicit the ill will and disdain of every employee and customer of your favorite guitar emporium.

But what are the “Stairways” of today? What are the more recent additions to the forbidden list, the new tunes that make salespeople cringe, floor managers retch and cashiers run amok?

We took a quick survey of stores in some of our favorite guitar cities around the country and came up with an easy consensus: Metallica’s “Enter Sandman,” Nirvana’s “Smells Like Teen Spirit” and “Come As You Are,” and Green Day’s “Longview.”

“They’re real simple to learn and they’re popular with the younger kids,” explains Kevin, a salesman at the Guitar Center outlet in Roseville, Michigan, a Detroit Suburb. “It’s like in the Seventies, when one of the first songs you’d learn would be “Smoke on the Water.” These have kind of replaced it.”

You can get away with playing this stuff, of course, few music stores really want to risk losing a customer just because they’re tired of hearing a particular grouping of three or four chords. But keep in mind that when it comes to wheeling and dealing for the lowest price, it might be best to remain in the salesperson’s good graces. Playing the wrong song might just cost you that incredible bargain.

How do most music stores deal with this terrible problem? Brian, the guitar guru at Manny’s Music in Manhattan, says “Sandman,” “Teen Spirit” and any “Greed Day” are most frequently butchered in the store, along with Stone Temple Pilots, “Vaseline” and Eric Johnson’s “Cliff Dover.”

“We don’t mess around here; we tell ‘em ‘You can’t play that” Brian says. “We have fun with it. Sometimes they get pissed off. We try to it at a happy medium so we don’t lose a customer.” Brian says it’s been years since he actually heard “Stairway” in the store.

Jason of Drum City Guitar land in Wheat Ridge, Colorado, hears a lot of Nirvana, particularly “Teen Spirit.” “But just because they know how to play the chords doesn’t mean they know hot to play at the right tempo” he notes. That’s not always a bad thing, however. “The quicker they can rush through it, the better,” he says. Fortunately, drumcityguitarland—which does a high volume of guitar sales—is busy most of the day. “I have the luxury of being too busy to pay attention to every guitar riff being played,” Jason says.

Kevin of Guitar Center also considers bad playing the bane of his existence. “Usually, we’ll just kind of look at each other and cringe—the employees, that is—especially when somebody plays those songs wrong, ‘cause they’re real easy,” he says of the tepid renditions of “Enter Sandman” and “Teen Spirit” he hears ad nauseam. His best weapon to fend off the would-be Hammetts and Cobains is a joke, perhaps a simple comment like “Sorry, this is a non-Metallica section.”

Kevin also notes that he occasionally hears “Smoke on the Water,” but that most of his customers seem to be “pretty aware” that with this they’re traveling on well-worn ground.

Andy, of Bogner Sound and Music in Flint, Michigan, claims to have been one of the first to post a “No Stairway to Heaven’ “ sign, which he kept on the front counter of his store several years before Wayne’s World came out and made the “No Stairway” law as much of a piece of rock culture as Spinal Tap’s boast, “But these go to 11.” Now, Andy says, it’s a steady diet of “Sandman” and “Teen Spirit,” with the occasional bad rendition of Nirvana’s “In Bloom.”

“We humiliate them as much as we can,” Andy says of offending customers. “Generally someone will walk over or we’ll stand around in a semi-circle until they stop, and we basically tell ‘em it’s time to get a life. Peer pressure being what it is, they normally chill out pretty quick.” By the way, Andy’s sign was stolen a few years ago, after Wayne’s World hit. “It was probably one of my competitors,” he growls.

Mike McCort and his staff at McCort’s Music in Berkley, Michigan, have noticed a pattern to their customers’ painfully predictable performances: “If their hair is below the ears, it’s ‘Enter Sandman.’ If it’s above the ears, it’s alternative,” he says. McCourt has also noticed the rise of a new generation of unpleasant store songs, courtesy of the ska-core sect: Sublime’s “What I Got,” Sugar Ray’s “Fly” and the Mighty Mighty Bosstones’ “The Impression That I Get” prominent among them. “It’s all that Top-10 radio stuff now,” McCourt says. 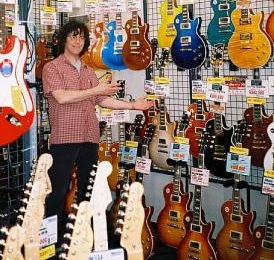 At Bizarre Guitar in the hard rock capitol of Phoenix, owner Bob Turner says of “Enter Sandman” and “Teen Spirit,” “I cut the strings as soon as they start playing them.” Turner also cringes when women walk into the store; ask to see a blue guitar and start strumming Jewel songs. “I’d rather see that guy in Scream holding a knife than see a girl asking for a blue guitar,” Turner says.

The St.Charles Guitar Exchange [Update: no longer in business] boasts of such all-star customers as Van Halen, the Rolling Stones, Bob Dylan, the Who, ZZ Top and Pearl Jam—and plenty of lesser-known customers who want to play like them. According to their sales rep, “Crazy Train” is a big favorite, as is anything from Metallica albums. We don’t get ‘Stairway’ much, but enough to make me sick. We’ve got Ibanez seven string guitars, so you can always count on them trying to play a Korn song or two. Everybody does the famous ‘Smoke on the Water’ out of tune. And then there’s the “tuning song.” Nobody knows how to do it, but everybody just sits there and tunes for 10 minutes — how to tune your guitar while on crack cocaine. (update: Guitar exchange is no longer in biz- ref ericjohnson.com) – Sorry about the grammar guys, we’re an open source site. You are welcome to submit an article if you so desire.

How To Become A Successful Music Artist

Music is a funny thing. From the time we are first inspired to pick up the guitar or any other instrument, most of us dream of stardom as a musician. Our fantasies are filled with […]