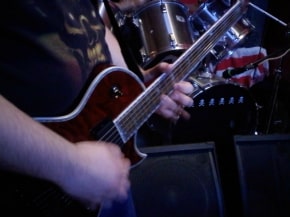 Sooner or later, it happens: band practice. For many people, rehearsal, or “re-hassle”, is a necessary evil, one that must be endured in order to get that glorious stage time that they (and their girlfriends) live for. Very often, however, rehearsal time seems like an exercise in futility, indecision, or intoxication and many bands practice over and over and never get any better. Why is that? I think it mostly happens because many players aren’t totally clear on what a rehearsal should be and what should be happening when the band gets together. I, your humble scribe, will try to give you, my faithful readers, an idea of what a productive band practice includes and what you should have together to maximize the time that the band is in the same room so that the time you have is put to its best use. I have short list of band commandments that, if followed, will be a big step towards getting your bands’ sound closer to where you want it to be.

1 – Show Up On Time. This seems like a no-brainer, but I am always amazed at how many musicians seem to have trouble telling time. A 7PM start time means the band hits the first downbeat at 7PM. That is not your arrival time. Be early. Get there in time to get set up, warmed up, and ready to go so that you are all good by the time the session is supposed to begin. Most bands are terrible time-wasters and then wonder why they never get anything done.

2 – Do Your Homework. This is perhaps the biggest rehearsal problem out there. Band time is not meant to be when you learn the songs, be they original or cover, that are to be rehearsed at a given session. You are expected to practice your songs at home so that when rehearsal time arrives, the band can work on putting the songs together for performance. The busier a given band is, the more important it is for each member to show up for practice prepared. It’s called having a “work ethic”. I have gotten gigs because a guitarist showed up unprepared for a rehearsal and was fired on the spot for wasting the bands’ time. I got the call in those situations because I have a reputation for being prepared and never letting bands down. Learn by example.

3 – Turn Down. This also should be common sense, but usually isn’t. The lower your practice volume, the better you will hear the full sound of the band, not just your own sound. If you are using a 100 watt full stack in practice, all you are going to hear is a wash of your own amp. Someone else in the group could be playing something terrible and you would never know because you can’t hear them. If your band is big on vocals and harmony singing, this is even more vital.

4 – Check Your Ego At The Door. Keep the greater good of the band in mind rather than your individual glory. The big picture is what it is all about. If your band succeeds, you succeed as a team.

5 – Sober Up. Nothing will make me fire a player faster than showing up loaded to a practice. If you treat rehearsal as your bowling night and the goal is to drink beer and party, you will probably be less than productive. Treating your band as a fun but serious business will go a long way towards being successful. Mind-altering substances are for leisure time, not rehearsal time.

Pretty simple list, right? It seems so to me. Everyone is free to run their band and their rehearsals as they see fit, of course, but these guidelines have served me well over the years and will most likely serve you and your band the same way. Maintain your focus on these principals and you will have a much better shot at maintaining a healthy schedule of gigs.

The SRH240, SRH440, and SRH840 are aimed at studio recording engineers and musicians, home recordist, and creators of audio and video content. In each of these situations, accurate sound reproduction is required in order to create the right blend of vocals and instruments, dialogue vs. sound effects, or different speaking voices. […]

Downloading Illegal Music: A Vote Against

Many are up in arms about the woman from Minnesota who is being fined $80,000 per song that she posted to a file-sharing network. Many feel the punishment doesn’t fit the crime, that it is […]

If you are a Beatles and Stones fan, then you will be interested in seeing these photos. Musicradar.com’s writer Joe Bosso had published an interesting news release about the god fathers of music. Think you’ve […]