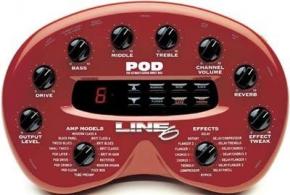 The law of the rock and roll jungle has dictated that, while electric guitarists get the glory of the girls, bassists have had the small consolation of being able to walk into a recording studio, plug into any half-decent direct box and immediately produce a useable tone. The advent of the Line 6 POD, a stellar and affordable direct-recording device for guitarists, is going to change all that. Now guitarists truly have it all.

Shaped like a space-age kidney bean, the POD uses Line 6’s trademark digital TubeTone software to create “amp models” that recreate the sound and feel of a wide variety of classic amps (that, of course, includes “modern” classics). For example, the tweed ’53 Fender Deluxe used for the POD’s Small Tweed setting was extensively tested, so that every aspect—from the overdrive characteristics of the power stage to the interactivity of the tone controls—could be replicated. Other presets in the POD’s vast sound spectrum include Tweed Blues (’59 Fender Bassman), Modern Class A (Matchless Chieftain), Brit Classic (’65 Marshall JTM45) and Fuzzbox, a satanically accurate recreation of a 1960 Dallas Arbiter Fuzz Face. On presets like Black Panel, where the amp being modeled (a ’65 “blackface” Fender Deluxe) has built-in reverb, the POD’s reverb control emulates a spring reverb with relative accuracy. For amps that originally came without spring reverb, the control adds a deep, large room reverb.

In addition, the POD features a full complement of onboard effects as well as built-in chromatic tuner and an extremely effective automated noise gate. When the unit is used to its full capacity as a stereo unit, the POD’s flanger presets (modeled after a classic Seventies ADA unit) whoosh like a squadron of drunken jet fighters, the chorus is lush and deep, the tremolo pulsates enough for even the most committed radiohead, and the rotary speaker emulator (which, like a real Leslie, operates at slow and fast speeds) is eerily realistic. In addition to the aforementioned goodies, this jam-packed unit also boasts a compressor and a full house of digital delays.

Even with this wealth of features, the POD’s intuitive, user-friendly interface is completely idiot (read “guitarist”) proof and will feel instantly comfortable to even the most technophobic player. All controls are easily accessible on the front of the unit, and there’s no scrolling or wading through multi-layered data banks.

While the POD can have its speaker-simulation circuitry bypassed and function as a full-service preamp, we tested the unit in just two environments where the amp emulation circuitry was engaged: first with a set of AKG headphones plugged into the unit’s headphone jack, and secondly with stereo outputs running through a pair of Neve preamps and into a pair of industry standard Yamaha NS-10M studio monitors. Our conclusion: even if you use the POD solely for private headphone practice, you’ll get more than your money’s worth from this modestly priced unit. Unlike so many other amp emulators, the POD had bass in spades, and the built-in effects smoothed out the harshness that can result in ear fatigue. Run through the studio set-up, the POD created a wealth of credible sounds in a fraction of the time that it would take to mic up three amps. I found that even if some of the amp models were slightly off base, each yielded a usable and unique tone. From stinging blues to full-on scooped metal, it was all in there.

Unfortunately, there isn’t room here to discuss the POD’s full MIDI implementation, which allows sequencers to trigger real-time presets and eq changes, or its PC- or Mac-compatible companion software that gives you additional amp models, cabinet emulations, more effects and editing capabilities. Suffice to say, the POD has everything and more you could want in a unit of this kind.

The POD’s emulations come very close to the tones of the original amps, and the unit is so reliable and controllable that it will doubtless become ubiquitous in home studios and massive $2,000-a-day recording complexes as well. This is a no-brainer, slam-dunk, must-have tool for any guitarist serious about tone.

Congratulations to Josh on your new Line 6 Relay G30 prize from Gear-Vault and Line 6. We hope you enjoy it! This is a picture of me and my new Relay G30 I won from […]

Are you a gigging guitarist? The POD X3 Live is a stage-ready unit that represents the true evolution of the ever-evolving guitar amp modeler technology. The POD X3 Live features an array of 78 highly-desirable […]