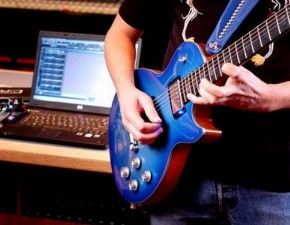 Sooner or later a time comes for anyone who has just learned to play the guitar. It’s time to choose a few songs that are not that demanding (considering your small amount of experience), but sound really good.  I would definitely start with Smoke on the Water, written and incredibly performed by Deep Purple for decades. The thing is, everyone knows it, it has that distinctive riff and people (especially girls) who have no idea how to play the guitar will appreciate someone who performs it. Even if you are not that good with the guitar, you can learn to play this song just by watching any of tutorials on YouTube.

Of course, you don’t want to be that guy who knows how to play the guitar, but knows only one song and annoys everyone. So after you master Smoke on the Water, next song you should definitely try is Smells like Teen Spirit by Nirvana. I literally don’t know any teenager who hasn’t heard this song, at least once. Just like the previous song, this one also has a distinctive riff that is so simple, and yet sounds amazing. You can add a little bit of improvisation if you don’t want to sound dull, but anyway you can’t go wrong with this song.

So those are two songs you need to know to play for any occasion whenever your guitar is around. Now there is also a third option that will make you stand out a bit from all the rookies who can play only the easiest songs. Learn to play Hair of the Dog by Nazareth. Also a lot of people know it or heard it somewhere, but not a lot of players (especially rookies) know how to play it. Not because it’s hard, but because it’s not so worn out.

So there you have it, first 3 guitar songs you need to learn to play on your guitar. Knowing how to play the guitar would make it a lot easier, but you could just watch tutorials on YouTube.

You May Be a Poseur

You know Jeff Foxworthy’s classic saying, “You may be a redneck”. . . routine? Listen to my version of the poseur signs. -If you grown a goatee and mustache because you thought it would look […]

Distortion and compression are twin faces of the same personality. Compression can give a guitar the violin like sustain many players seeks in a good distortion pedal, while distortion can iron out transients in a […]