Way back when electric guitars were still new fangled a few country players found they could add accents and expression to their music by twisting the guitar’s tone control while they played. Although subtle and somewhat tricky to negotiate, this maneuver produced a shift between muted bass and bright treble, adding color and movement to the notes.

Which Leads Us To The Question How Does a Wah Pedal Work?

The wah-wah pedal is based on a simple concept but its effect is far more dramatic. Using a powerful filter to sweep through a broad frequency spectrum, the wah pedal boosts and exaggerates specific tones. Creating sounds that range from thick, flubbery bass to scratchy, stinging treble. The further forward the pedal is pushed the higher the boosted frequencies, resulting in expressive, and vowel-like tones. 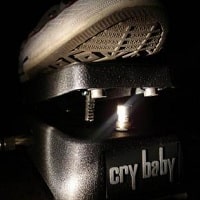 Although Ampeg was experimenting with a wah pedal as early as 1961, Vox was the first to create a commercially viable product. In the mid-sixties, Brad Plunkett, an engineer at Thomas Organ, was working on a circuit to replace the traditional three position tone switch with a less expensive potentiometer.

On the advice of a fellow engineer, Plunkett based his design on the circuitry of an oscillator. Plugging in guitar to test his new device his ears were greeted with the extreme almost vocal sound of the world’s first wah-wah.

Vox immediately saw potential in the new device. Ironically the company has been accepted by a trumpet player named Clyde McCoy who had asked for a device that could emulate the tone of a trumpet mute being opened and closed. As a result, the commercially available wah-wah was sold as the Clyde McCoy Wah-Wah Pedal and even bore McCoy’s image on the base plate. In 1968 eager to differentiate its product from competing brands in the US Vox slapped the name Crybaby on its model. Soon afterward the pedal was adopted by Jimi Hendrix and the rest as they say its history.

During four decades of service, the wah-wah circuit has appeared in various forms. But whether produced by Morley, Snarling Dogs, Jim Dunlop or Digitech, all wah-wah pedals are simply variations on Plunkett’s original theme.

The world has never been the same since Line 6 unleashed the original POD in 1997. During that time just walking into a guitar shop, recording studio, or early adopter’s home resulted in one or […]