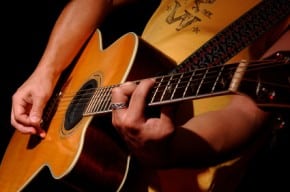 Musical theory is no ones favorite topic, especially if you’re a beginner. How ever it’s something you cannot avoid if you eventually want to expand beyond basic open chords and barre chords. In this article I want to introduce you to musical keys on the guitar, what chords sound good together and how you can easily find those chords for a given key using a concept known as one – four – five.

After you read this article and watch the example it should be crystal clear how you can start figuring out the right chords for each key on your guitar.

Understanding What a Musical Key is

A Musical key on it’s most basic level is a group of notes centred around one particular note. So if you’re playing something in the Key of F major the entire piece is centred around the F major note and also uses the other notes found in the F major scale.

It may use all the notes in that scale, but more often then not will only use a few. How do you know what the right notes are to play together in each key? That’s what we’re going to learn next.

The One-Four-Five of a Key

A natural pattern that exists in music is One-Four-Five also written in roman numerals as I-IV-V. These numbers stand for the degree of a scale. So the first (root note), fourth note and fifth note are going to sound well together.

Let’s look at an example in the Key of D, first we need to look at the D major scale.

From here we can see that the One note is the D, the Four note is the G and the five note is the A. So playing in the Key of D major you are going to want to use the D chord, G chord and A chord.

This isn’t to say that these are the only chords that work for this key, of course any of the notes in the major scale will work, but these are the easiest ones to pick out.

Watch the video below to learn more about the one-four-five concept and watch another example.

Like this lesson video, but you ready for more guitar lessons and musical theory? Why not try an acoustic guitar lessons dvd. DVD lessons are becoming the quickest and easiest method of learning to play guitar from home, and for less money then private instruction.

Young, Dumb, and Full of Strum — Many of us were inspired to pick up a guitar and play because we were turned on by an advanced, experienced player we heard in our formative years. […]